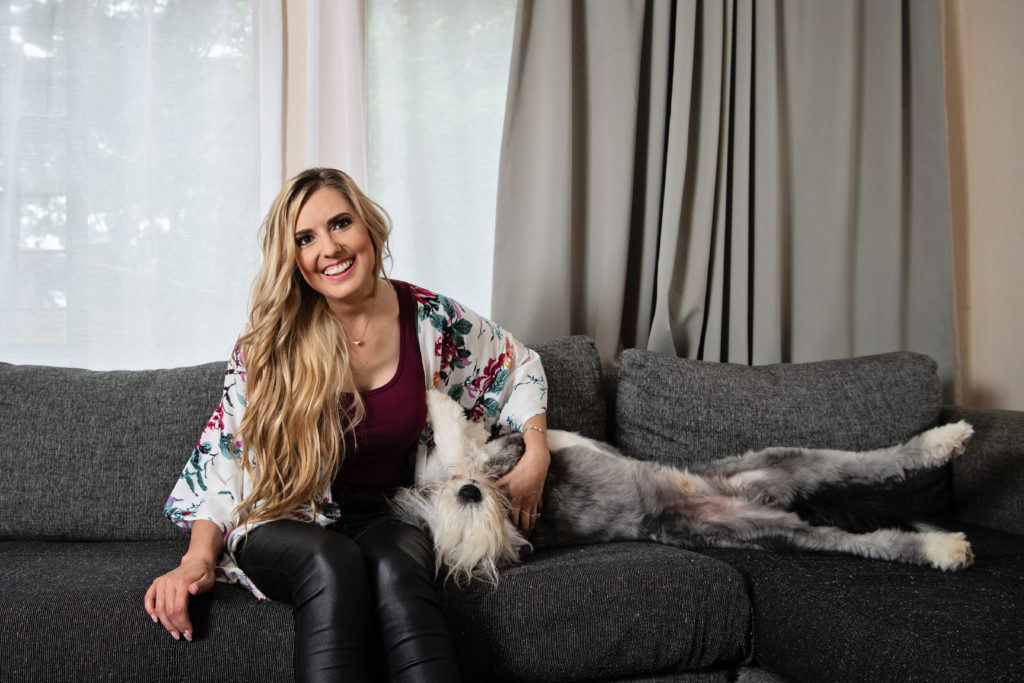 “All we have to decide is what to do with the time that is given to us.”

This is the inspiring message that I took away from my interview with Esmarie Yssel, the well-known voice for Klankkoerant, the current affairs breakfast show of Pretoria FM. This is, of course, a quote from Lord of the Rings, one of Esmarie’s favourite movies.

Talking to Esmarie feels like you’re catching up with an old friend. There are no uneasy pauses or carefully constructed answers. It’s just a conversation between two people talking about life. We digress and talk about movies halfway through, what is supposed to be a professional interview, and laugh and joke at some of the comments when we get back on track. It’s easy to see why Esmarie chose a career in journalism and why she and radio are such a good fit. She is a conversationalist and puts people at ease, with ease.

Starting her day at 4am every morning, means that Esmarie grabs a cookie as she walks out the door, careful not to disturb her family who is still soundly asleep when birds have hardly woken up themselves. When the red “On Air” sign lights up, it’s game time. Armed with a cup of Rooibos in one hand and a microphone in the other, Esmarie and the team of Klankkoerant wakes up the citizens of Pretoria with news highlights and current affairs.

The discussions on this show are informative and intellectual and so are the specialist spokespersons who are invited to join in the discussions. From there it’s all about the news and putting together the sound clips that make up the bulletins we so easily dismiss for everyday radio reporting. This, however, does not mean that Esmarie is just a serious person. She is intelligent and has a keen eye for news, but she is also one of the bubbliest and light-hearted people you’ll meet.

Once the working day is over, Esmarie heads home to spend time with her family. Esmarie and her husband, Elrich, share their home with two very boisterous and bouncy Bearded Collies, Bentley and Belle. With personalities as big as their “fros”, these dogs are the life of the party. Counter surfing and gardening being their main talents.

It’s easy to dismiss Bearded Collies as placid or submissive dogs due to their fluffy appearance. The main thing to remember here is that they are still a Collie breed. Bred in Scotland as working dogs, Bearded Collies aren’t very common in South Africa. They are high maintenance with regards to training, exercise and grooming. As with all journalists, it was clear that Esmarie had done her research and knew of all this before she and her husband considered the new additions to become part of their family. “Bentley was 16 months old when we adopted him from Ashvale Bearded Collies. We were already on the waiting list for a puppy, but wanted to give him a forever home. His adoption came at the perfect time, as it had already been four years since Nina passed on, and my dog-mom heart was still longing for that kind of love. It was the best decision we’ve ever made. We got Belle as a puppy and named her after Beauty and the Beast’s Princess Belle, which means beautiful.”

As can be imagined, Bearded Collies need a lot of exercise. They need walks and runs, and since Esmarie and her husband are keen hikers and outdoor enthusiasts, it pays off to have an active canine companion or two. About three years ago, after one of these long walks, Bentley started limping.

What was thought to be inflammation turned out to be Osteosarcoma, a type of cancer that starts out in a bone tumour, but can quickly metastasize to the lungs. The prognosis was not good and the vets were not optimistic , but thanks to the holistic approach of Dr Gary Eckersley, Bentley was spared the amputation of his leg, and treated with specialist surgery to remove his ulna.

“ Today Bentley is healthy, but his leg is sometimes still sensitive, especially in overcast and cold weather. We feel a new growth on the exact same spot where the sarcoma was surgically removed. He is however still on seven naturopathic medicines, prescribed by his specialist, including CBD oil, and there’s no sign that the cancer is back or that he’s feeling any discomfort.

Words can’t describe how grateful we are that we could save his leg. In May of this year, it’ll be three years since diagnosis. His prognosis – with chemotherapy – was 3 to 6 months.”

As a journalist, Esmarie has made it her life’s mission to tell the stories of others. The rhythmic recollection of the conversations she recaps draws you in and makes her an exceptional storyteller. So, it should come as no surprise that Esmarie also writes poems and stories. Story-telling, in many forms, is in her blood.

She loves watching all kinds of different movies and series. Everything from documentaries to fiction.

When asked if she would ever consider another career, the answer was quite surprising. “I would love to make a career change and become a nature conservationist. I would focus on my passion for the natural environment. If I could be in forests or be hiking up mountains as part of my career as well as with my husband and beardies, I would have everything that I could possibly want.”

I think this is exactly why Esmarie writes the most amazing travel guides and reviews. Adventures in Thailand and New Zealand are summarised in her travel blogs, and tell the stories of adventures shared with her husband, Elrich. Elrich Yssel, by the way, is also a wonderful story teller and shares his talents on screen as a film maker. He recently won the award for best short story at the Forum Films Film Festival.

So, what does a day behind the scenes really look like in a household that homes two bearded collies and two full-time professionals? Do the kids ever get naughty? “Belle has destroyed more shoes than I could keep count of. They love playing tug of war with socks or slippers that they’ve stolen. And Bentley is the gardener. He has a special talent for digging holes. It sometimes looks like he’s planning a prison break. Our beardies are also talented counter surfers, so, one should never ever leave any pleasant-smelling food on the kitchen counter.”

This is not surprising, we’ve all been there and we still love our pets dearly. No, you won’t get that block of cheese back, and yes, the grass will grow back! Life with a dog will always be an adventure.

As always, we wanted to find out what advice a seasoned mother of beardies had to give to anyone wanting to bring a Bearded Collie into their home.

“Words can’t describe how grateful we are that we could save his leg. In May of this year, it’ll be three years since diagnosis. His prognosis – with chemotherapy – was 3 to 6 months.”

Brace yourself for the purest kind of love and affection. If you’ve never had a beardie, you won’t be able to grasp the emotional bond that you can have with a dog. A beardie WILL steal your heart. There’s also something about their eyes. You can see the light and life of the beardie’s spirit in them. And their noses… they give them a teddy bear-like appearance. They’re bouncy and very active. If you’re not an active, outdoorsy person who likes to throw a ball or play tug of war, a beardie is not the breed for you. You have to make time to play with them and to take them for walks. As they also have active minds, they need to explore for much-needed stimulation. Your backyard should also be big enough for a beardie to run at full speed.

They are double-coated dogs who need intense grooming to prevent the undercoat from matting, which takes effort and time, but once you’ve owned a beardie, you’ll never want another dog breed ever again.

Bentley is a cuddle bunny and Belle a busy bee. Bentley was diagnosed with osteosarcoma more than 2 years ago and our journey with him has been one of blessings and gratitude. Both of them sleep on our bed, so, they’ve stolen our bedroom and our hearts.”

It’s easy to see why Esmarie is so fond of her “beardie bears” as she calls them. She shares many of their traits. She is fun-loving and outdoorsy, intelligent and charming. We hope to see a lot more of Esmarie, Elrich, Bentley and Belle in the near future. Whether it be on television, on a hiking trail in Pretoria or in their Instagram Stories where they venture into the hills of Scotland. This is definitely a couple you want to keep eyes on.