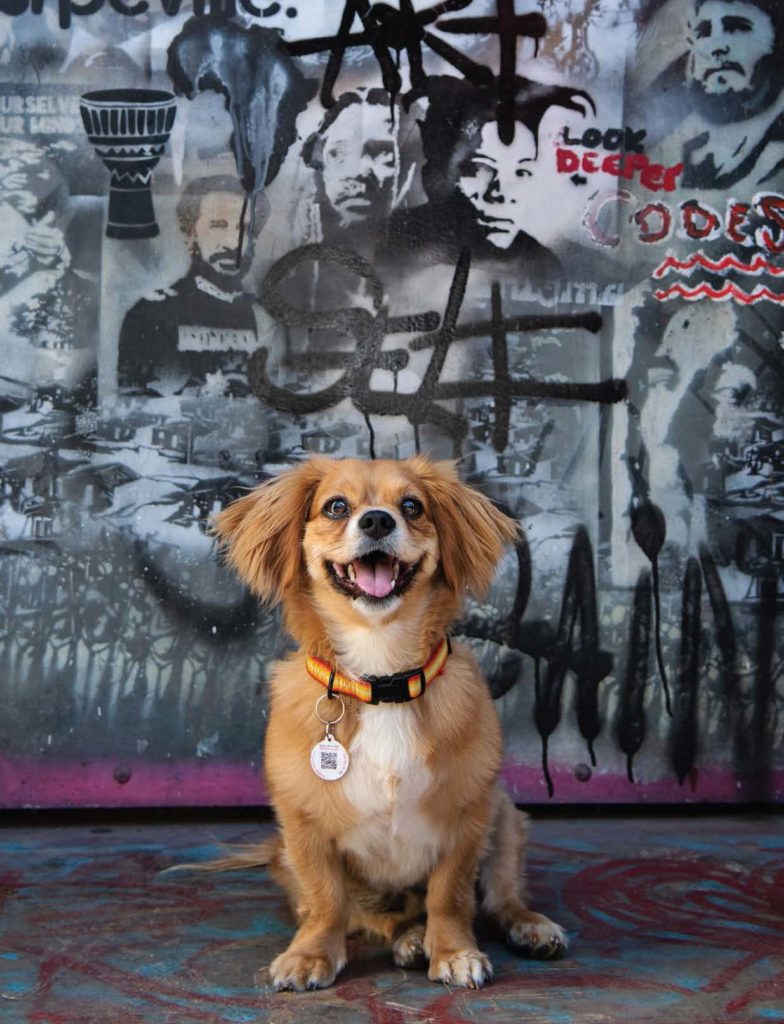 Every year we host our cover model competition, enabling a reader to be a celebrity for a couple of months. Each year we receive more and more entries and we are absolutely flattered about that!! This year we had so many entries to go through
that we were almost two weeks late with our top ten selection. It goes without saying that this is my least favourite part of the job. IT’S HARD!!! We love all our readers and there are so many fluffy faces and great stories
in this competition that we dread having to pick. This is also why we give our Facebook and Instagram readers the job of assisting with the final pick.

So, as our little Dachshund ambassador passes the torch, we welcome our 2020 Pet Prints Cover model winner, Tequila!
Personally, I love this name. It immediately tells you this pooch has spunk! The Mexican origin also fits well with this Chihuahua mix pup. So, if you’d kindly pass the salt, let’s get to know this little fire-cracker.

Tequila is the fur-child of Danielle Legrand. As a cat mom, Danielle admits that Tequila wasn’t really part of their “plan”, but he was definitely the best decision they made. This
feisty little munchkin keeps everyone on their toes and adores his granny! It would be hard to imagine life without him.

How old is Tequila and how did your paths cross?

Tequila was born on the 13th of February 2018, so that makes him almost 2. My boyfriend (Robert) and I had started discussing getting a pet. He wasn’t too keen in the beginning as we weren’t home a lot of the time. At this point, we had already agreed to meet my Mom’s kittens when we travel down to the coast for my birthday.

By the end of February, he was asking me what I wanted to name the puppy I liked and this was when I realised he was serious.

Shortly after this discussion, we were visiting one of our friends and her Chihuahua had gotten pregnant before they had the chance to sterilize her. She was adamant that she would send the pups to good homes and that we needed to take one. We argued with her, but you know how some friends can be, so we just brushed it off.

About a week later, she messaged Robert and nudged him again to ask that we please take one of the puppies. I was still totally oblivious at this point. 14 Feb, he sent me photos of the puppies, but we couldn’t settle on which one we both liked, so again I left it. By the
end of February, he was asking me what I wanted to name the puppy I liked and this was when I realised he was serious. Tequila was meant to be named Yondu, the blue character from Guardians of the Galaxy. But, once we met, we knew the name was wrong. He got his new name the day after we took him home.

Tell us a bit more about you and your family

Robert (Dad) is 31 and is a leap year baby. 2020 is his 8th birthday. Robert has a brother in KZN and a sister who lives 2 units away from us. Robert’s sister has a daughter
that Tequila is quite fond of and sees daily. Robert’s parents have been together for 35 years. We lost Robert’s father in 2018, Tequila was a bit lost for a few days after his passing. He now makes sure that Ouma gets extra love every day.

I am 31 and I’m just an average baby. I have 3 brothers, 2 in Pretoria and one in the East Rand. My parents got divorced when I was quite young. My father lives in Oranjeville and my Mom’s dogs live with him. Tequila really enjoys playing with their Collie-mix. Tequila has only met one of my brothers and is quite fond of him as well. I would say that the family in Johannesburg is quite closely knit.

Did you always have pets growing up?

As a kid, I had a cat. She was my companion for eleven years. We also had dogs. My Mom always talks about me sharing my biscuits with the dog she had when I was about two.

We love animals, so I also had Dwarf and Teddy hamsters, bearded dragons, Siamese Fighters, a rat, two mice and two gerbils.

Robert’s family always had dogs and cats. Robert also had fish as a kid.

Does Tequila have any siblings? If so, how many and tell us a bit more about them.

Tequila has two cat brothers. One is Pukk, he is my cat. The other is Meww; he is actually my brother’s cat. My brother had to move and his new place does not allow pets.

Pukk and Meww are also brothers and were born on the 2nd of January 2018. Meww is convinced that he lives with Robert’s sister. He only visits us for cat food pouches. Pukk adores Tequila, despite the fact that Tequila will snap at him when there’s food or a favourite toy on the bed.

Every day, Pukk greets us at the door, waits for Tequila to walk up to the door and headbutts Tequila. It is the cutest thing to watch. This is usually followed by me saying something like “You see, he loves you and you’re always mean to him. He must really love you if he forgives you every single day!” When no one is watching, these two are busy snuggling up and licking each other.

What is Tequila’s favourite pass time?

Tequila has 3 major things that he does every week.

Monday to Saturday, you can usually find him at Ouma’s house (Robert’s Mom), baking in the sun with Skeletor and Troy. Every morning is like a new adventure to go see Ouma. BUT!!!!! When Great-Granny comes to visit…. No one and I really do mean no one, exists, except Granny. This child will squeal as if he is being murdered. He loses his little mind. This will go on for at least 20 minutes. He only calms down once he is in her lap and she’s holding him. There is a video on IG that shows his excitement of her arrival.

Then on Sundays, we go visit Ganny (my Mom). He loves his Ganny. He perks up as soon as we enter the boom to the enclosure. It’s as if he knows exactly where we are going. He will talk to her through the back window of the car until she opens the boot and greets him.

Then there are his toys… He has a massive attachment to his plush Penguin toy. He can’t go to bed without it and Penguin must sleep on the bed with him. Do not dare try to take Penguin away from him.

Apart from all this, we have discovered a new toy from Petzone that he loves almost as much as Great-Granny and Penguin. We had to travel between 4 Petzones, to find some more. So, if Petzone is reading this, we’re looking for some more squeaky dumbbells (LOL). He will wait patiently at the gate for me to get home, greet me and then run and fetch the dumbbell. The aim of the game; try and take it away from him. This happens daily. We have gone through 3 dumbbells already.

Tequila looks really feisty, is he a difficult fur- child to take out or is he just showing off?

Tequila can actually be quite feisty. We regularly have to tell people, “Just stand still!” He tends to bark incessantly at new people. He storms at them, barking and obviously, people just try to get away. All he really wants is to tell you he’s the boss and sniff your shoes. He has never bitten anyone, but he has nipped at someone’s shoes because they kept walking. At the IG meets, we let him run off lead, or on a very long puppy lead. He’s very reactive on a lead. Something I desperately want
and need to fix, and am looking into. Once he is off the lead, he’s quite ok. He also gets tunnel vision, once he’s set his sights on someone or another dog, his recall
disappears, and I cringe. But once the other dog (in most cases) turns away, he goes straight back to me or Robert.

Overall, he’s actually a very sweet dog. He is very, very protective over Mom and Dad and if he is being held by one of us, you might lose a finger… Just joking. We hope to find a reputable trainer in the East Rand somewhere so that we can understand his behavior and correct anything that needs to be corrected, whether it is with us “parents” or with Tequila.

Does Tequila have any pet peeves?

Tequila HATES when you try to take his Penguin away. Wash-day is a nightmare. I must sneak Penguin into the washing machine. Once the cycle is done, I have to hide Penguin between the washing otherwise Tequila will bring a wet Penguin onto the bed.

To some extent, the cats are also an issue. He cannot handle that they are getting affection and he is not. Also, you cannot feed the cats without giving him a tidbit.

What is your 5-year pet plan? Are you keen on adopting/procuring more pets or are you content in your current lifestyle?

I have told Robert that I want to properly adopt a dog when we get a house. I follow a lot of rescues on IG and I am always blown away by the transformation and pure thankfulness of some of the animals. I take my hat off to the people who go fetch these animals, I don’t know that I would be able to be so diplomatic about the surrenders or confiscations. I have a deep yearning to give an animal the love that they so dearly wanted and didn’t get. We would probably adopt a bigger dog as we would have the space to do so. I would love to have a Bull Terrier and Robert would love to have an Irish Wolfhound. I don’t know if those two are in the next 5 years though.

Well, I think it’s easy to see that Tequila is living his best life and that he is surrounded by all the trimmings a small dog could want. Adoring parents, doting grandparents, and happy siblings.