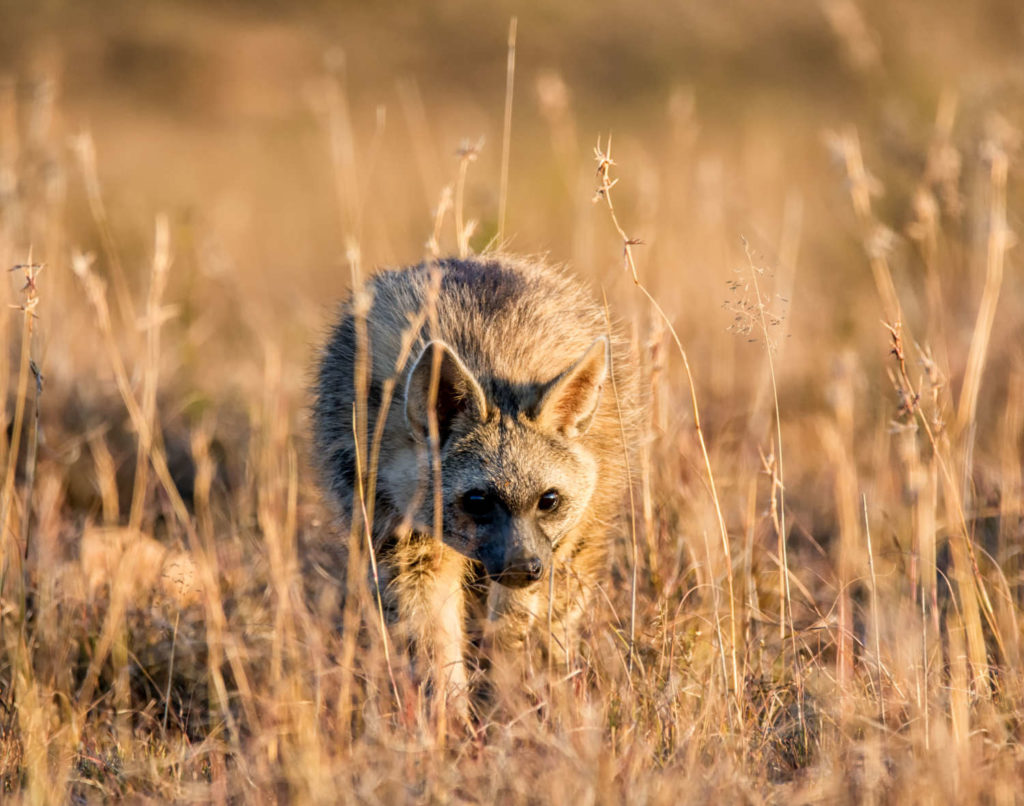 In a farm, situated somewhere between Delareyville and Stella, in the North West province, a border collie alerted the farmers to a little Aardwolf (Proteles cristata) cub. The farmers were concerned for the little cub’s well being and contacted the Johannesburg Wildlife Veterinary Hospital for assistance. With guidance from our wildlife rehabilitation specialist, Nicci Wright, the farmers tried to reunite the cub with her family. Try as they might, they could not find the den and the two days of trying to reunite the cub with her mother were, thus, unsuccessful.

The farmers took care of the little cub for a few days until we were able to drive through to collect her.

Our vets examined her and found that she was quite underweight and that she had mange. Thankfully, it was Demodex mange, which is easily treated by regular bathing with a veterinary shampoo.

Raising a baby Aardwolf is an experience all of its own and one which is hard to describe, unless you have raised one yourself and have had the experience. Contrary to how we perceive the adults to be – shy and elusive – their cubs are extremely playful. Feeding times were filled with trying to get an ADHD animal to focus and drink her milk, while all she wanted to do was to play and run riot. She was only a couple of weeks old when we collected her and she was started on a special carnivore milk formula. Once we found a suitable teat (that she was happy with), Maple took well to her milk from the very beginning, and currently guzzles about 500ml of formula per day. She has quadrupled in size and has a very healthy appetite. Aardwolves are insectivorous and Maple was at the right age to introduce her to insects. Over the past weekend, she was offered some crickets which she devoured overnight.  I had thought that it may take a while for her to get used to her new food item, but she has proved me wrong!  The following day, I offered her a larger quantity of crickets, which she immediately ate right in front of me. This was a new behaviour for me, as the previous Aardwolf I had raised would not eat her insects in front of me. I would only find the empty bowls the next day. Maple is extremely entertaining. She tears around her enclosure while I feed her, she stops at my feet and bites my toes, and then rushes off at full speed again, all the while, purring non stop. Even at this very young age, she has an intimidating Aardwolf voice. When frightened, or even in play, she emits scary growls which belie her age. Although Maple is consuming crickets, she does still enjoy having her milk. She will slowly be introduced to other insects, and once she is eating a variety of them, her milk intake will be gradually reduced, but not completely. When she enters the next phase in her rehabilitation process, a bond will need to be formed with her new “mother”.  This will be done through feeding her formula and as she settles in, she will gradually be weaned completely.

Maple’s next step in her rehabilitation process will mean a trip to the Kalahari, to an affiliated and permitted rehabilitation centre. This habitat is ideal for Aardwolf as it offers adequate food items and burrows, and holds a healthy aardwolf population.  In this environment, she will go into a pre-release enclosure in situ, which will allow her to habituate to her new surroundings – all the new sights, scents and sounds.  As she integrates this, she will be fed natural food items by her new carer. When the time is right and when she is ready, she will be walked out every night. This is so that she can learn to forage for her own food. She will also learn what she can and cannot eat. The young aardwolf will be able to explore and fulfil her instincts by investigating her new environment while under the watchful eye of her carer. As she matures and develops physically, Maple will be allowed out for longer and longer periods, often on her own. It is important that she knows that she can return for support feeding whenever she needs to. This way, her progress and development can be observed as she slowly but surely wilds up. The goal is for her to develop her own territory and ultimately have cubs of her own.