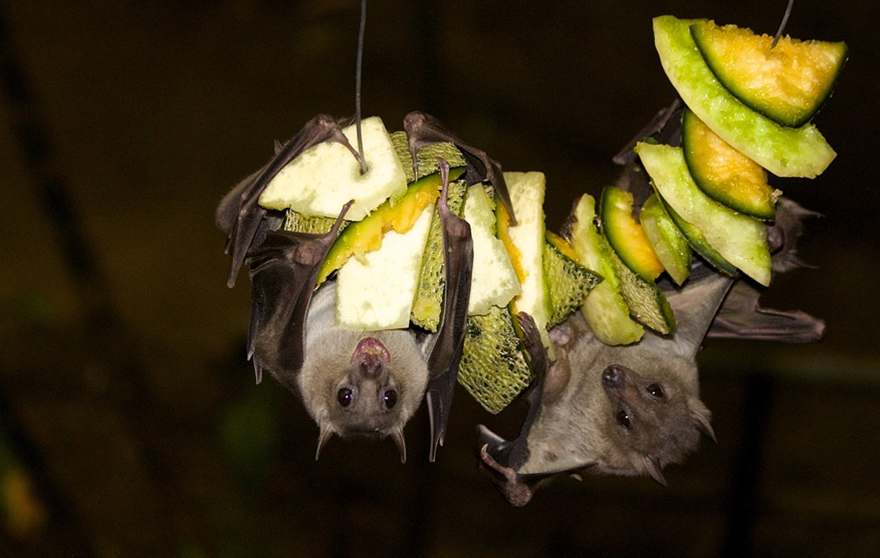 The scientific name for bats, Chiroptera, is from the Greek cheir (hand) + pteron (wing), or “hand wing.”

Many palaeontologists and scientists believe that bats have been around for millions of years, even before humans inhabited the planet.

There are more than 900 species of bats in the world, with some experts estimating the number to be as high as 1,200 – making up a quarter of the world’s mammals.

Most bats are brown and black, but a few are colorful shades of orange or red.

Bats are found as far north as the Arctic Circle and as far south as Argentina and the southernmost tip of South Africa, with the exception for some islands, and the Arctic and Antarctica.

Bats can live more than 20 years, some species can live up to 30 years in the wild.

These mammals are also nocturnal, meaning that they sleep during the day and are awake at night.

In the day, they sleep upside down from trees or the roofs of caves, holding on with their sharp claws.

They also sleep upside down so that they can fly away quickly, if necessary.

The wings of bats are made up of cartilage, with small amounts of calcium.

The bones are similar to human fingers, but are more flexible.

Bats are the only mammals that can fly, and they can fly at speeds of up to 90 km/h.

Unlike birds, which flap their entire forelimbs, bats flap their spread-out digits.

They are also among the only mammals known to feed on blood.

Bats “see” using echolocation (A few other animals use echolocation, including dolphins and some cave-dwelling birds).

They can tell the distance of various objects by how quickly the sound waves bounce back to them.

Bats can find their food in total darkness. They locate insects by emitting inaudible high-pitched sounds, 10-20 beeps per second and listening to echoes.

Scientists have been able to use the anticoagulation agent in vampire bat spit to treat victims of a stroke as well as heart patients.

Bats are not blind and, in fact, many bats can see quite well. Some species can even detect ultraviolet light.

Bats can eat up to 1,200 mosquitoes in an hour and often consume their body weight in insects every night, helping keep bug populations in check.

Some bats eat flowers, small insects, fruits (frugivores-fruit eaters), nectar, pollen (can play an important role as pollinators) and leaves, though it depends on the type of bat.

Some bats will squeeze fruits in their mouths and drink the juices.

There are only three species of “vampire bats”—bats that live off the blood of animals.

Vampire bats do indeed drink blood, mainly from cattle and deer, but they don’t suck blood like the legends say. Rather, they make a V-shaped cut and then lick up the blood, according to the San Diego Zoo.

Some may fly up to 50 kilometers to find food during their nightly journeys.

They mostly prefer warmer areas that are closer to the equator, and they can be found in rain forests, mountains, farmland, woods and cities.

Some bats migrate south for the winter, or to warmer areas, while others hibernate through the cold winter months.

A bat uses 30-60 days of stored energy to wake up out of hibernation. That is why it is so important to not disturb hibernating bats.

Bats roost in trees, caves, mines and barns — any place that provides shelter from the weather, protection from predators and seclusion for rearing the animals’ young.

Bats live together in groups, called colonies, which contain 100 to 1,000 bats.

Male and female bats meet in hibernation sites, called hibernacula, where they breed.

During hibernation, bats can survive in freezing temperatures, even after being encased in ice.

Mating occurs in the late summer and early autumn, and the female store the male’s sperm, until the following spring.

A pregnant female will carry her young for a gestation period of 40 days to six months.

Most bats have only one pup a year, making them extremely vulnerable to extinction.

The pup will weigh about one-fourth as much as its mother, at birth.

Young bats drink milk from their mothers to survive, much like other mammals.

Most female bats fly with their young clinging to them, and some species have false nipples that their pups grasp during flight.

The mothers and pups stay in groups, separate from the males. The other mothers help take care of the pup until it is old enough to care for itself.

Bat droppings, called guano, are one of the richest fertilizers.

Flying foxes (genus Pteropus) are the largest bats. Some species have wingspans of 1.5 to 1.8 meters and weigh up to 998 grams, according to the Oakland Zoo.

Common misconceptions and fears about bats, have led many people to regard the creatures as unclean disease carriers, but bats are actually very helpful in controlling the population of crop-destroying insects.

Many bat species around the world are threatened with extinction. More than 250 species are recognized as endangered, vulnerable or “near threatened.”

The story of Dracula originated in Eastern Europe; however, real vampire bats are found only in Central and South America.

During the U.S. civil war, bat droppings were used to make gunpowder.