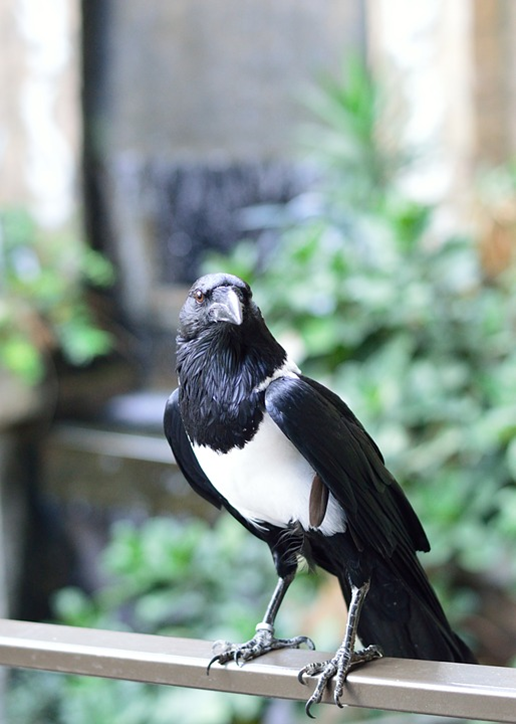 We regularly have to accept crows that are in need of a home or sanctuary, but when we were presented with a family unit comprised of five members, their background had to be investigated. This was a story in the 1982 World of Birds Newsletter which was worth being remembered.

Six years previously, a crippled pied crow, with a broken wing, subsequently named Jack, had strayed into the garden of Mr and Mrs Futter of Diep River, and found the place much to his liking, after being served with meals and making friends with Pascha, the Labrador.

Nothing special happened during the next few years, that would not be in line with the personality of a crow, until Pascha died and left the crow lonely and desolate.

Until then, Jack had never bothered about other birds, but suddenly a female crow arrived on the scene and fell for Jack’s charms, even to the extent that she followed him, unable, as he was, to fly, on foot and became confident enough to even enter the house of the hosts.

In no time they constructed a nest in an old chair, right at the back of the neighbour’s garden and there was no objection from the neighbour who was looking forward to getting a baby crow out of the deal for himself. Four eggs were laid and three chicks hatched.

The parents became very protective and aggressive, admirable qualities which are needed for a brood to be reared successfully, but the neighbours had good reason to become concerned. The mother crow started to use her capacity of flight to chase away the children  who ventured too close for her liking, and now there were conflicts of interest. Three weeks passed and the chicks were at the point where they would leave the nest, in just a few more days, to explore the world.

It was late in the evening when my doorbell rang. The crows original hosts, the Futters, stood at the door with a box that contained the three chicks, as well as the parents. They had heard that another person, a friend of the neighbours, wanted to ‘collect’ one of the chicks and one of the parents. Was it a coincidence that he was a taxidermist?

The next day the Futters had put the chicks into a makeshift cage in their garden where the crows should have stayed in the first place, and they left an opening where the parents could get in and out to feed the chicks.

The solution was short lived. The neighbourhood children started to tease the mother crow with sticks, a pastime to which she did not take very kindly, and she, in turn, attacked the children who thought it very funny to be chased by a bird, and intensified the teasing. The parents of the children viewed the danger from the birds as very serious and threatened to shoot the whole black lot if they did not disappear within one day.

It was a sad parting for the Futters and the crow family, when they found their permanent home at the World of Birds. We promised never to part the parents, which had been so conscientious in their duty to rear the chicks. It was easy for us to give and keep this promise.