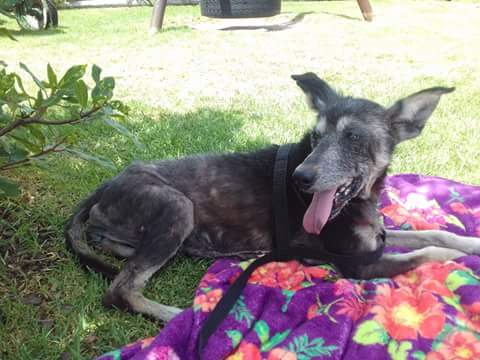 On 31st January,while scrolling through FACEBOOK, Traci Vink came across a photo of this old, very sad looking dog (the profile pic on her page) with the caption “brought into the practice. Looking for owner”, which had been posted by the local vet practice.

Well, my first thought was: “There’s no owner and she was probably dumped!!!”

I shared the post and went on with my day.

Later that day I was on FB again and someone had commented on my shared post. I looked at her face again, tears coming to my eyes, trying to imagine the life she’d had.

I love old dogs and have rescued a few, but I knew I couldn’t take her in and it broke my heart. I had to get her out of there and into a home.

She had to get to know warmth, a full tummy, love and kindness – she HAD to experience that, even if it was just for one day!

I messaged Karen Brash that fosters for DOMESTIC ANIMAL CARE, with her photo, asking: “Can she retire with you please?”

Without hesitation, the reply was: “YES. I must just check with Sharon Kemp that runs DAC, if it’s okay.”

Sharon also replied with a yes.

I sighed with relief and told the photo “Princess, you’re safe now. We’re coming to get you.”

Sharon contacted the vet practice asking if they would allow them to take the sad, old lady on.

And so she was collected on the 1st February.

Now my part in this began…I fundraise and we needed food and money for a full medical check up at a local vet.

On her first night with Karen, she slept outside on a bed in a jersey, tucked in with a warm blanket – she didn’t want to go into the house.

We discovered that, over and above the mange and growths etc,, she had hardly any teeth, but she ate pellets softened with chicken broth

She was booked into see the vet on the 2nd February.

I put out an appeal for a sponsor for her, as well as donations of soft food, and Val Fenix came forward, agreeing to be her official sponsor for the rest of her life – however long that would be.

I felt that she need to be treated like royalty, so, on day 1, I named her Kelly, after Princess Grace Kelly.

Kelly had 4 guardians:  Val, Karen, Sharon and I.

We had all played roles in her rescue and would continue with her for as long as she was with us.

The vet confirmed what we had already suspected – that she had had an awful life with countless litters – estimating two litters a year!!!

She was about 12yrs old and, no doubt, had a host of internal issues, which would only be looked at once she became stronger.

She weighed 12kg when we got her. Over the next 4 days she picked up 2kg. (Her ideal weight should be about 25kg.)

She had all she needed to clear up her skin issues and has been been dewormed etc.

She had medicated baths, and Karen rubbed “Repcillin” all over her body. Within one week her skin was softer and all the dry skin had started falling off.

On day 4, she had her first outing, going to a charity walk. She took it all in, loving all the attention and enjoyed the strolling around and sniffing everything.

She ruled her foster home and didn’t take nonsense from any of the dogs or puppies, which was very funny to watch, but they were all, also, respectful of this dear, old soul.

She was doing so well. Loving life, eating well, reprimanding the puppies and, generally, living the royal life, she’d been promised.

Kelly had so much personality and we laughed at so much that she did, and she did everything with the attitude; I may be old and have had a tough life, but I am here now and I don’t take nonsense. From anyone! She even walked with attitude.

Kelly was a total character and we were blessed to share this part of her life with her.

She would remain in “permanent foster” with Karen, as none of us wanted her anywhere else, but with us.

She had, and always would have, whatever she needed or wanted.

On the evening of 20th February our Princess developed a little cough – it could be one of 3 things: kennel cough, her heart or that cancer had spread to her lungs.

The next day we took her to the vet to be checked. Her heart, considering that it was enlarged, was okay. Cancer hadn’t got to her lungs, but blood tests revealed that she had distemper.

She deteriorated rapidly on the vet’s examination table and we held and kissed her, and told her how beautiful she is.

We knew what we had to do and it’s never easy, but we had promised her on the day we rescued her, that she would never suffer and we would honour her life, with a dignified death.

She was cremated and her ashes will be scattered on one of our beautiful beaches, when we’re ready to do so.

Thank you for coming into our lives Kelly. You were loved and we kept our promise, even though it still hurts us to think of all the things we still wanted to do with you…

I couldn’t have rescued her without the help of the following people:

Karen Brash,top notch foster for DAC who agreed for her to retire in her home.

Val Fenix, who paid for all her food. medication. vet care and a private cremation.

And last, but not least, Bronwin Meyer, also from DAC, who took her on her final visit to the vet and was also with her at the end.