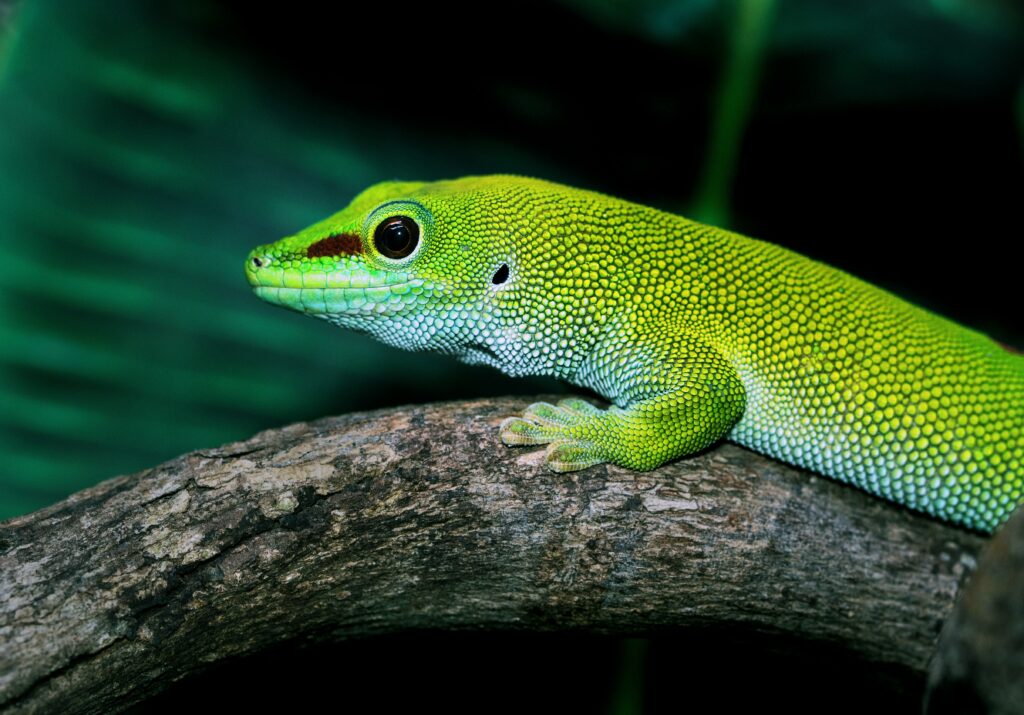 There are over 1,000 species of geckos and they all possess some similarities, including a short stout body, a large head and, typically, well-developed limbs. Geckos are found on every continent except Antarctica.

They are mostly found in warm climates and have adapted to habitat ranges from rain forests and jungles, mountains, grasslands and even deserts. Geckos can vary greatly in length, with some of the smallest species that are under 2 centimetres, while some species can grow up to 60 centimetres.

Geckos have a lens within each iris that enlarges in darkness to let more light in, making their eyes over 350 times more sensitive to light than a normal human.

Most geckos lack eyelids and, instead, have a transparent membrane, which they keep clean by licking it with their tongues.

Geckos use their tail for different purposes, such as to act as fuel tanks to store fat and nutrients, to maintain balance with certain obstacles, like climbing a branch, and add camouflage to help them to blend into their environment.

A study published in the Proceedings of the National Academy of Sciences journal, have reported that when a gecko falls, it twists its tail to the right angle to enable it to land on its feet.

They are also able to shed their tails if a predator grabs them, as a last escape effort.

They then regenerate their tail.

When the gecko sheds its tail, it continues to wriggle as if it is still alive, which hopefully is enough of a distraction so that the gecko can escape the predator.

Geckos are known for their sticky feet that gives them the ability to crawl across smooth or even horizontal surfaces (such as ceilings) without falling.

This is possible because their toes have tiny hooks which act like suction cups during walking. Teflon is the only material to which a gecko cannot climb or walk without gliding. Geckos occur in various patterns and colours, usually brightly coloured, while some species can even change their colour and may be lighter at night time.

Most species of geckos are brown or grey, depending on their environment. These camouflaging colours help the geckos to blend in and to hide amongst rocks, dirt and sand from predators. All geckos shed their skin at regular intervals, with some species differing in timing.

When shedding begins, the gecko will detach the loose skin from its body and will start to eat the shed skin.

Most geckos are nocturnal, which means they are awake at night and sleep during the day. Nocturnal gecko species have an excellent night vision. Their colour vision is 350 times more sensitive than that of a human’s colour vision. Many geckos, especially young ones, make noises to communicate when they are upset or defending their territory, or even to attract a mate. Geckos have an excellent sense of hearing. Studies suggest that they are capable of hearing tones higher than those detectable by any other reptile species.

Geckos are polyphyodonts and are able to replace each of their teeth every 3 to 4 months, depending on the species type. On average a gecko will live up to 8-10 years, but a number of species will live to double that. Geckos typically eat fruits, insects, such as crickets, worms and grasshoppers and flower nectar. Geckos will also consume spiders, centipedes and small scorpions, and they will even eat other hatchling geckos. Geckos mate several times during the year. Mating habits vary amongst gecko species, but most may include posturing, movements, vocalizations and even physical nipping and nudging.

Female geckos give birth by laying eggs in protected locations under rocks, logs or tree bark. The eggs are sticky and white, and have soft, pliable shells that gradually harden once they’re exposed to air.

Depending on the species, the eggs incubate anything from 30 to 70 days before the fully formed baby geckos emerge. Females do not take care of the eggs. The newly emerged babies are called hatchlings.

After hatching, it will be a year before the baby geckos are mature and ready to meet and mate. Depending on the species and location, their endangered status can range from least concern to critically endangered, according to the International Union for Conservation of Nature (IUCN) Red List. Some gecko species are endangered due to habitat loss and because of the introduction of new predatory species into their environment.

Due to their small size, geckos are often preyed by snakes, large spiders, birds and some mammal species. Geckos are often kept as pets by humans around the world. In some regions of the world, geckos are allowed to be indoors as they can help rid the house of unwelcome insects like mosquitos.