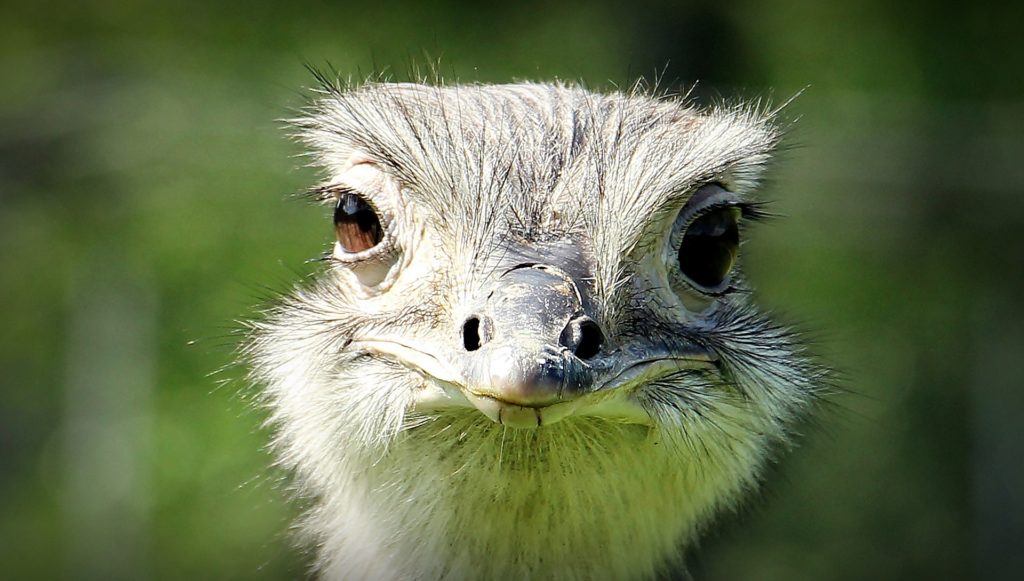 Ostrich Facts: The scientific name for the common ostrich is Genus: Struthio and specific name: camelus.

This makes the binomial name for the ostrich Struthio camelus. Loosely translated from ancient Greek, the scientific name means thrush / sparrow camel. Ostriches could be found roaming in Asia, Africa and the Arabian Peninsula, but today they’re limited to the woodlands and savannas of sub-Saharan Africa. There are two species of ostrich; the common ostrich and Somali ostrich

The ostrich, which is flightless, is the world’s largest bird. An ostrich can weigh anything between 70kg and 140kg, and measures between 1.2m and 2.7m in height.

An ostrich has a long, bare neck, long sturdy legs and a bulky body that is covered with feathers. The male ostrich is called a rooster and the female ostrich is called a hen. Males and females have different coloured feathers – males have black feathers with white tails, and females are mostly between grey and brown, which is perfect for camouflage when sitting on the nest. Both sexes have small heads, short, wide beaks and big brown eyes, protected by long, dark lashes. These long, dark eyelashes help shield their eyes from the sun. Ostriches can’t fly (being so heavy), but rather use their wings for cooling and balance.

Ostriches’ wings reach a span of about 2 meters and are used in mating displays and to scare off predators. Ostriches also use their wings as rudders for maneuvering their bodies and changing direction as they travel at high speeds. When turning, braking or running in a zig-zag, ostriches rely on their wings to stay balanced and in control.

A group of ostriches is called a flock of ostriches. Ostriches have three stomachs. The ostrich has the largest eyes of any land animal, measuring almost 5 cm across. One eye can weigh about 60 grams. They have brilliant eyesight which means they can see an object as far away as 3,5km during the day, which makes it perfect in allowing predators and any threats to be seen from a great distance. Unlike all other living birds, the ostrich secretes urine separately from faces.

Whereas most birds have three to four toes on each foot, ostriches are unique in that they only have two on each foot. The big toe is on the inside and has a big, sharp nail for protection. The smaller toe is on the outside for balance. Ostriches are the fastest runners of any birds or other two-legged animal, and can sprint at over 70 km/h. When running at full tilt, it takes strides of up to 3 to 5 meters. When threatened, an ostrich would normally run away.

If running away from danger is not an option, ostriches will use their powerful legs to kick. With a 10 cm talon on each foot, their downward kicks can cause serious harm to potential predators.

Groups of ostriches will often graze among other animals like giraffes, zebras and antelopes. Their presence is useful, because they alert other animals when danger is near. In the wild, ostriches live an average of 30 to 40 years, but in captivity they’re able to live anything from 50 to 70 years and, will continue to breed well into old age.

Ostriches are mainly vegetarian, eating anything from grass, plants, fruit, roots, leaves, flowers and seeds. They will also eat insects and reptiles and other small creatures. Ostriches can’t choke on their food. Since they lack teeth, they swallow small stones to grind and crush the food they take in. This is done in a part of the throat called the gizzard. An adult ostrich carries nearly 1kg of pebbles in its stomach, which helps with food digestion. Ostriches can go without water for several days, as they can source metabolic water from the plants they eat. Ostriches drink by scooping up water into their gular pouch and then lifting their heads to let the water move down their throats.

They enjoy water and frequently take baths where possible, and will drink a fair amount of water when available. During the mating season (normally between June – November) the male ostrich’s beak and legs turn red/pink to attract the female for mating. Male ostriches do a mating dance for females to impress her. If the dance is good enough a female will mate with the particular male. All of the herd’s hens will place their eggs in the dominant hen’s 3m-wide nest, though her own are given the prominent center place. Each female can determine her own eggs amongst the others.

The dominant female may lay up to 11 eggs, and the other hens lay between two to six eggs. The communal nest may end up containing as many as 60 eggs.

The alpha male and dominant female will take turns looking after the nest.

Males compete with one another for control of several females (or hens), and the winner becomes the leader of the herd. An ostrich’s eggs are the largest of any bird – at up to 15cm long and weighing up to 1.4kg. The ostrich’s egg might be the biggest in the world, but interestingly enough, it is the smallest egg in the world when compared to its body size.

The eggs are incubated by the dominant female by day and by the male by night, using the colouration of the two sexes to escape detection of the nest, as the drab female blends in with the sand, while the black male is nearly undetectable in the dark. When the eggs hatch after 35 to 45 days of incubation, the male usually defends the chicks or hatchlings and teaches them to feed, although males and females cooperate in rearing chicks. Although chicks can run as fast as 55 km/h at one-month-old, they are still vulnerable to predators like lions, cheetahs, hyenas, leopards and hunting dogs.

When confronted, adults will try to distract predators or lure them away from the young. Within days, the chicks leave the nest to follow their parents, who protect them from the hot sun or rain by keeping them huddled under their body or outstretched wings. Chicks are born with a spiky, greyish-brown down. They grow brown feathers after 4 months. By the time the young ostriches are 18 months old, they are fully grown. Contrary to popular belief, ostriches do not bury their heads in the sand. The ostrich is farmed around the world, particularly for its decorative feathers (feather dusters) and also for its meat, which is marketed commercially, and its skin which is used for leather products.

They are also threatened by habitat loss due to human development and agriculture. The wild ostrich population has declined drastically in the last 200 years, with most surviving birds in game parks or on farms. One ostrich egg is equivalent to 24 hen’s eggs. A single ostrich egg can take up to 1, 5 hours to boil.