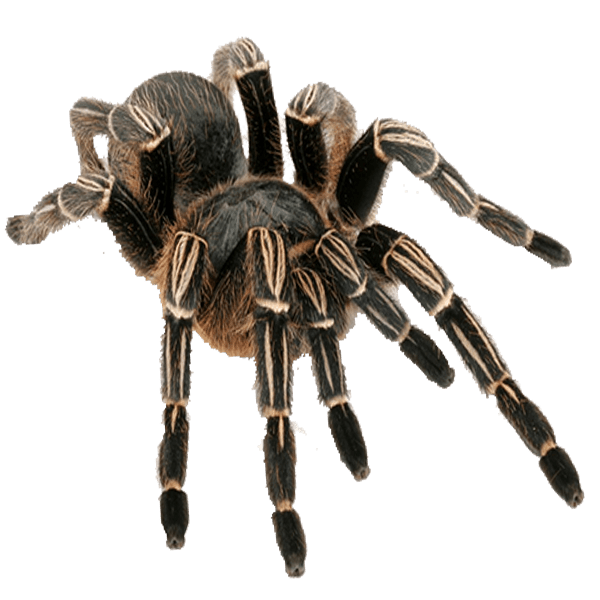 The term tarantula is usually used to describe members of the family Theraphosidae.

Tarantulas are the largest spiders living on Earth today. There are over 900 species of Tarantulas (in the family Theraphosidae) and can be found all over the planet including North and South America, Africa, Asia, and Europe- except Antarctica. These large spiders like to live in many different climates, but generally prefer to stay in warm environments. They can be found in forests, deserts, and jungles. Some Tarantulas live in the ground while others live in the trees.

From front right leg to rear left leg, tarantulas range from 11.4 cm to 28 cm in length. They can weigh anything from 28.3 grams to 85 grams and have strong jaws and fangs.

The fangs of the tarantula are distinctive, as they are positioned parallel to each other and face downward. A Tarantula’s jaws move up and down, while most spiders will have a common side-to-side motion.

Some tarantulas are dull brown or black, while some species are striped or even coloured. They have 8 tiny eyes that will pick up on the slightest movement. Tarantulas have two body parts- the cephalothorax and the abdomen. Like all spider species, the tarantula has eight legs. The legs and body are covered with hairs, which are extremely sensitive to vibrations. Although this looks like hair and is commonly described as such, spiders and other arthropods do not have true hair like mammals do. Mammalian hair is mainly made of keratin, while arthropod setae consists largely of chitin. Tarantulas are nocturnal hunters, which means that they are only active during the night and sleeping during the daytime hours. They will normally wait for their prey to come close enough to grab. They kill their prey with a bite from their fangs, which then release venom that kills their victim Their jaw is also strong enough to crush certain prey. Tarantulas are extremely sensitive to vibrations on the ground that may indicate the presence of prey or danger. As a way of self-defense, some species simply lean back on their haunches, raising their head and 2 pairs of legs in the air and exposing their curved fangs in an intimidating display that will give the impression that they are larger than they really are.

Some species of tarantula use their legs to scrape off the fine hairs from their abdomen, called urticating hairs, and throw this to an enemy to cause irritation if it comes in contact with the eyes or skin of a predator.

Tarantulas are all venomous, but how dangerous they are to humans varies from tarantula to tarantula. Many are harmless to humans and rarely bite if they are not feeling threatened. Some bites to a human are similar to a bee sting, with only temporary pain and swelling. Some African tarantula bites have been reported to cause moderate illness, but there have been no severe cases with human deaths due to toxicity from a tarantula bite.

The venom itself may not be dangerous to humans, but it can trigger allergic reactions in some people. Tarantulas are cold-blooded animals. They are unable to regulate their internal body temperature. Tarantulas will shed their skin from time to time because they have outgrown their old exoskeleton and need more room to grow. Tarantulas are known as long-lived spiders, although their life spans vary by sex as well as species.

Male tarantulas can live for as long as 10 to 12 years, but once they successfully mate, they usually die within a few months. Female tarantulas can live twice as long as some males, and some recorded reports have documented females to have lived for 30 years. Tarantulas are ambush predators, pouncing on prey rather than trying to use a web to trap its prey like other spiders. They do however spin a tripwire to signal an alert when something approaches its burrow. A Tarantula’s diets vary depending on the species’ size and habitat. They feed primarily on insects like beetles, grasshoppers, and other small spiders. Some larger tarantulas are known to prey on small vertebrates like lizards, frogs, toads, and even rodents. When prey comes close, tarantulas ambush it, grab it with their legs, inject paralyzing venom, and then kill it with their fangs. They would also inject a fluid that breaks down the victim’s tissues that turns the prey into a soft pulp, which can then be eaten. Mating between tarantulas takes place at various times of the year. In some species, the male performs a courtship dance to encourage the female to become receptive.

After mating, the female normally carries her eggs in a silken cocoon attached to her body. Depending on the species, a female can lay anything from 50 to 2000 eggs at a time.

They do not take care of their babies at all and, instead, mothers would leave them to fend for themselves. The growth of a newly hatched spider into a mature spider is a long process and can take up to ten years. Some of the more popular and colourful species of tarantulas are now threatened due to collecting for the exotic pet trade. A South American tarantula known as the goliath birdeater is widely considered the most massive spider alive today, growing up to 28 centimeters in diameter. Despite its name, it only rarely preys on birds, instead of feeding mostly on earthworms, insects, and other invertebrates. Predators of tarantulas include snakes, lizards, frogs, spider-eating birds, raccoons, and skunks as well as mammals such as coyotes, mongooses, and foxes.