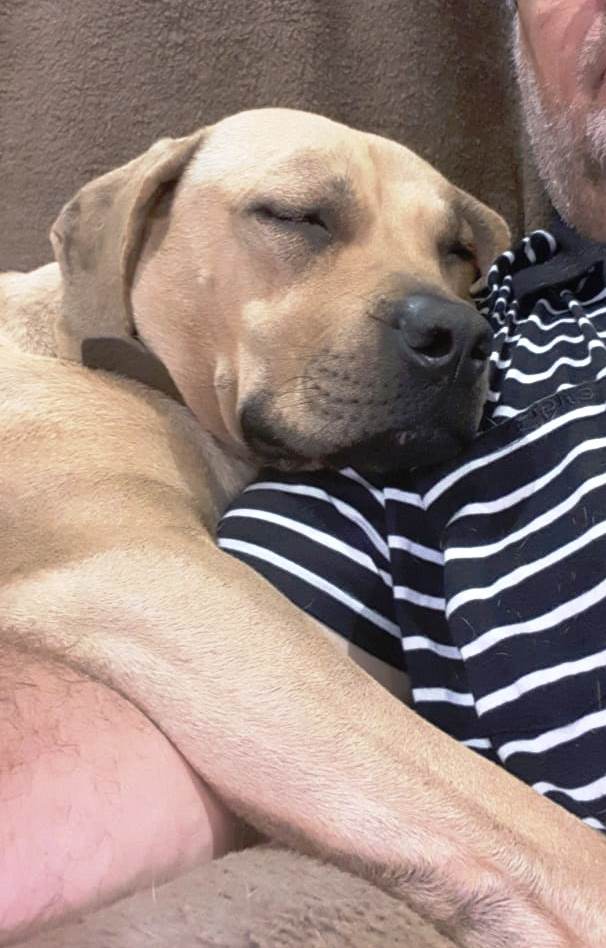 Chained to the wall of a house in Fisantekraal township, the gentle Boerboel-Ridgeback female named Sandy paced up and down, dust puffing up around her dry paws, hot sun glaring down on her thin body. She was in shocking condition. But, as bad as it was, this day was actually the first day of a beautiful new life for Sandy.

When we first met Sandy, she was a beautiful tan-coloured pup, fat as a piglet, with a cute little ridge down her back and a friendly personality. She’d been brought in for vaccinations and her owner, a Fisantekraal resident, proudly exclaimed that she’d just gotten ‘a new baby’ – a breeder, (who’d also docked her tail) had given the puppy to her because he couldn’t sell it. (Of course, she wouldn’t give us his details.)

Sadly, we know this woman – she frequently gets animals which she can’t afford and they end up neglected. Without stronger laws, all we can do in these cases is to check up constantly and help where possible. We hoped that things would work out for this pup.

For some time, Sandy looked fine. But when we took her to be spayed, at nine months old, she was in poor condition and clearly not socialised; she fought being on lead, refused to walk, and was terrified and snappy at the vet, needing muzzling. We were not happy.

More frustrating still was the fact that, legally, our hands were tied. All we could do was speak to the owner, explain the legalities and keep monitoring things; we also sent an inspector to warn the owner. Things improved…for a while.

The months flew by and, with a tiny handful of volunteers, a rapidly-expanding area, and thousands of animals, we were very busy. But Sandy was always on our minds.

It was the height of summer and heat shimmered across the streets of Fisantekraal. The day volunteers, Belinda van Tonder and Ursula Neethling, drove past the house, scanning the street for animals in need. There, chained alongside the house, with no shelter or water, the sun baking down on her, was Sandy. Furious, they advised the owner in no uncertain terms that she had to rectify the situation within days (legally, one has to give warnings first). At the follow-up, she was given one last chance to get things right. And then, Sandy ‘vanished’ from sight.

At the next visit, Sandy was no longer visible from the street. Insisting on seeing her, they checked the property and found Sandy hidden in a half-built structure at the back of the property. They were confronted by a near-skeletal dog, pacing like a caged tiger on the end of a rusty chain in a filthy yard, clouds of flies surrounding her. She couldn’t see anything but grey concrete walls and dirt. And yet, despite her neglect, she was still friendly and loving.

They were absolutely livid. There was no way they were leaving without Sandy this time and, despite great resistance, they got the owner to sign her over. At long last, Sandy was safely in FAW’s care.

Better by the day

She was immediately taken to the vet for a check up and then she went to Uitsig ARC, where FAW’s animals board. She couldn’t tolerate much activity around her so she was placed in an enclosed, fairly isolated area to avoid overstimulation.

Slowly, she gained weight; her butt wiggled in excited greeting when people visited, especially if they had cookies in their pockets. She grew to love walks (without other dogs) and craved any attention, always shuffling closer for head scratches. Sandy had discovered love and she was not going to let it go.

A month passed and she’d gained confidence and loved seeing people, although she seemed sad; concerned that she might be lonely, we moved her to a more spacious camp with a bit more activity, hoping this would lift her spirits. But it was overload for her; her weight dropped, her stress levels increased and she showed aggression towards dogs in neighbouring camps. She went back into her original pen and, although it helped, she still struggled to gain weight and was still stressed. Everything about her was telling us: Sandy needed a home – a peaceful, loving, happy forever home.

Rehoming Boerboel-type dogs is challenging, let alone one with special emotional needs. Sandy needed a one-in-a-million forever family – finding such a home would be miraculous.

The sky’s the limit

Against the odds, that one-in-a-million home did come along. When Aneri saw a picture of Sandy, she knew that she was the perfect dog for her dad, Johan. And she was right. When Johan met Sandy, it was love at first sight. She looked up at him with her soft brown eyes and it was clear to see that she knew: you are.”The One.”

On her first evening home, we received a picture that brought us all to tears: beautiful Sky was leaning against Johan; her face, eyes closed, was buried in his chest as he hugged her. You could see that, for the first time in her life, she felt completely at peace with someone; she felt unconditional love.

One year on and Sky is living a dream life: she has a garden with trees and can watch the world go by, gets tucked up in her own bed at night, watches TV on the couch, and is never hungry. Her ‘dad’ works from home so she always has company and she recently welcomed a new doggy friend, when her family adopted a Boerboel-Great Dane in need. She hardly has nightmares anymore and she’s a joyful, happy dog.

Most importantly, Sky is loved beyond measure – and always will be.

Thank you to everyone involved in Sky’s rescue and rehabilitation, to people who support Fisantekraal Animal Welfare so that we can be there for dogs like Sky, and, of course, to her forever family. You changed her world.

Fisantekraal Animal Welfare is based in the township of Fisantekraal, 10km outside Durbanville, Western Cape. This grassroots organisation has been working in the area for over a decade, providing primary healthcare, sterilisations and assistance with everything from treating injuries to providing kennels. FAW is a registered NPO (051-348) and PBO (930057641). www.faw.za.org