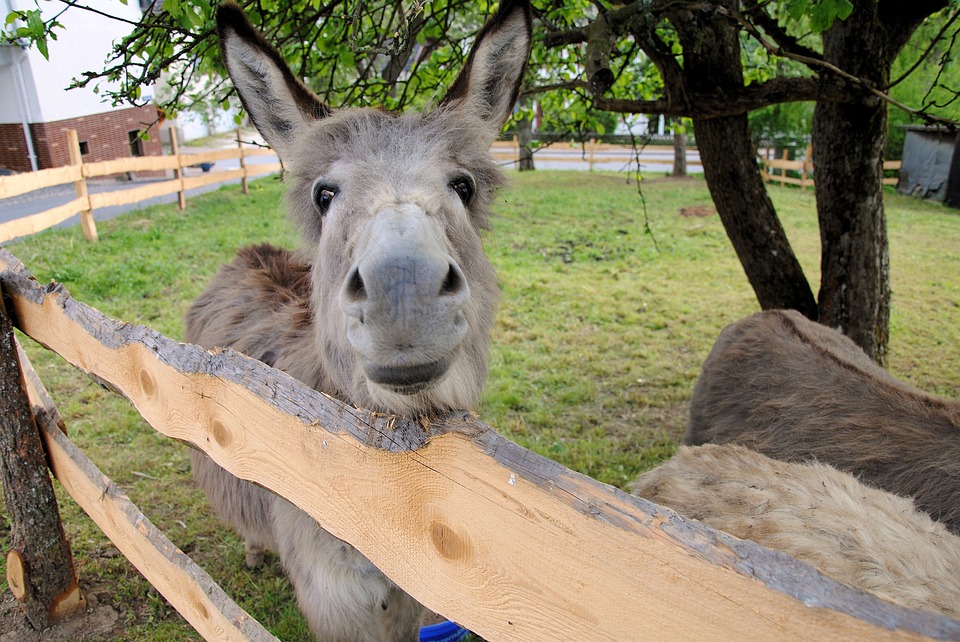 In 2001 two donkeys were rescued from a miserable existence, blindfolded and walking endlessly in circles to mix mud and straw in a brick-making arrangement just outside the little village of McGregor in the Western Cape. They found a home with Johan and Annemarie van Zijl who had recently retired there.

It quickly became evident that there were many more donkeys in need of help and the concept of a Donkey Sanctuary was born. The name “Eseltjiesrus” was created, meaning “resting place for little donkeys” and the sanctuary was registered as a welfare organisation in 2007. The vision of the sanctuary is to promote the welfare and status of donkeys through a Culture of Caring.

The first official sanctuary resident to arrive was Adam, from Zoar, where he had been a cart donkey for many years until deemed too old and frail to work. He was followed by local cart donkeys, Thabo and Ida, whose owner had been diagnosed with cancer. Soon up to twenty donkeys were cared for on land rented from a local farmer. An adoption programme was established whereby people could support a chosen donkey financially and get regular news about “their” donkey. Fundraising took the form of an annual Book Fair. The first was a modest affair held in a local restaurant. Eleven years later, the Book Fair is recognised as the largest book sale in the Western Cape.

In 2012 the sanctuary was financially strong enough to buy its own property, just 5km outside McGregor. Permanent structures could be erected, tailor-made to the needs of the donkeys, staff and visitors. Fields were fenced, irrigation and grazing established, and over 160 donated trees were planted. Large shelters provide protection against the elements. The old farmhouse was converted to accommodate a restaurant, information centre and administration spaces. Eseltjiesrus is open to visitors from Thursdays to Sundays and trained guides inform the public about the need for good welfare for donkeys, often the forgotten members of the animal world.

Currently the sanctuary has 21 rescued residents. The oldest is Eeyore, over 40 years old. The geriatric donkeys that have dental problems get two special soft meals daily. Individual attention is given to each donkey: grooming, hoof care, fly repellent, inspection and treatment of any little wounds, and palliative medication where necessary.

We follow the guidelines of the Global Federation of Animal Sanctuaries which state that more animals should not be taken in if it were to impact negatively on those already in care. This prompted the very important component of our work: “improving welfare beyond our fences”.

Eseltjierus can never accommodate all needy donkeys, so a large part of its work is outreach in the form of advocacy and education for owners and animal welfare professionals, networking with other organisations and spreading the “Culture of Caring”, which is its hallmark. We present regular workshops, related to donkey welfare.

Eseltjiesrus is governed by a Board. Tight administration and financial control ensure the long-term viability of the organisation. The need to secure and expand the future of the sanctuary through sensitive implementation of succession planning, and development within the limitations of resources, is recognised.

The sanctuary is a not only a centre of excellence for donkey welfare, but also a beacon of hope in our fragmented world. Therapeutic interactions between the gentle, humble donkeys and visitors each with their own needs and challenges, remind us daily that humility is not a weakness, but strength.  Come and look deep into a wise donkey’s eyes – but you will have to kneel.

In May 2010, the sanctuary was contacted by a concerned animal-lover, who had visited a wine farm near Paarl, where there was a “petting zoo”. Here she had seen a collection of animals, including pigs, goats, sheep, ponies and five donkeys, living in a tiny space, knee-deep in filth.

The sanctuary approached the owner and persuaded him, with some difficulty, to sign the donkeys over to Eseltjiesrus. We did not have space to accommodate them at the sanctuary, and a “field of dreams” was found in Franschhoek, near expert veterinary care.

For eight months a team of volunteers cared for the little family, winning their trust and accustoming them to regular handling and care. Hooves were trimmed by a farrier, and medication was administered, where needed. The little herd grew glossy and confident. Ziggy was one of the youngest members of this family.

When the group were ready to be re-homed, they were placed in foster homes, and Ziggy came to the sanctuary.

Ziggy is now a pleasing example of how important it is to handle young donkeys from early on: she is friendly and trusting, bold, confident and inquisitive. She is an interesting example of a long-haired donkey.

Although she was never a working cart donkey, she does have work to do at the sanctuary. Her mission in life is to show humans how charming well-handled donkeys are, and how donkeys that are correctly cared for, can teach us so much.

Donkeys are often the forgotten species in animal welfare, accorded inferior status by the public and many welfare organizations. Eseltjiesrus Donkey Sanctuary in South Africa stands as a beacon of hope for better lives for these humble animals, promoting their welfare and status through a number of different avenues.

At the sanctuary, rescued donkeys live out their lives in a peaceful setting, receiving best quality daily care. They no longer work for people; they now work with people, intuitively recognising humans in need. Under the watchful eyes of our trained guides, visitors may meet the donkeys. Every visitor leaves the sanctuary as a Donkey Ambassador, sensitised and better informed. At the same time the sanctuary offers a pocket of peace for the donkeys and visitors.

We network closely with organisations with similar goals. We have established a communication platform Donkeys for Africa, for organisations throughout Africa working towards improved donkey welfare, with a quarterly newsletter carrying information about shared problems, solutions, projects and challenges. See http://www.donkeysforafrica.org/ and https://www.facebook.com/donkeysforafrica/

All in all, Eseltjiesrus Donkey Sanctuary has established itself as a respected centre for promoting donkey welfare through a number of different avenues. This is made possible through the generous support of the public and impeccable governance by the Board of this registered charity.