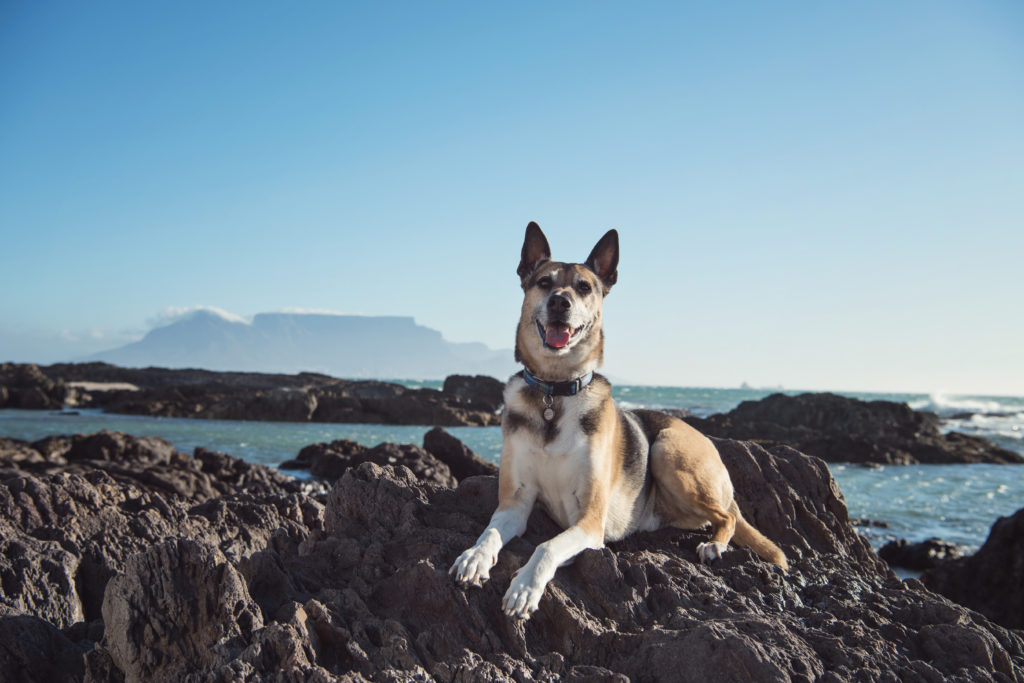 At the end of last year, we were so impressed with the support Purple Kennel Ambassador, Bruno received during our annual Cover Model Search Competition, that we decided to give him and the organisation a special celebratory cover. Run by Samantha Chatham, the Purple Kennel Project has become one of the biggest kennel drives in the Western Cape. With an ever-increasing support system, we were thrilled to have the opportunity to spend some time with Samantha and Bruno on an extremely windy Blouberg Beach.

With very little coaxing or instruction required, Bruno handled himself like a professional model, lifting his head where needed and strutting his stuff across sharp-edged rocks and crispy shells alike. I honestly think that if it wasn’t for the wind howling and almost blowing us away, this would have been the easiest shoot to date.

Here’s what you need to know about Bruno and the Purple Kennel Project. I hope that this initiative will inspire each person reading it to contribute to welfare in one way or another this winter.

Bruno is an absolute gentleman and a brilliant model. Please tell us his story and how he joined your family.

Ask anyone who has met him, and they will tell you that Bruno is a truly special dog – So intelligent, people swear he is half human!

Eight and a half years ago, I had just turned onto the N1 towards Cape Town off the R44 from Wellington. I saw a man on the hard shoulder holding a very sick looking puppy into the road. I stopped, thinking he was injured, only to find out the man was trying to sell him! I told him to put him on my back seat and whilst I pretended to look for money, I kept my eye on my rear-view mirror waiting for the opportunity to pull away. That was the start of Bruno’s new life.

I called African Tails who I had been working closely with to ask if they could help. They, unfortunately, had no spare foster homes and asked if I could keep him for a night or two.  The rest, as they say, is history!

The vet took over 100 ticks out of this skinny, very sick looking 3-month-old puppy. Whoever could have imagined he would turn into the regal, camera-loving cover model he is today?  One thing I do know, like most rescue dogs, he knows he has been rescued … as he just never stops being grateful and eager to please. As a rescue dog-mom, there really is no greater feeling to see this.

What about the rest of the family?

I have four fur kids and I am what you might call a ‘rescue convert’. As a child, and to this day, I had always had a fetish for Scottish Terriers, but like many ignorant people out there, I thought the only place you could get them from were breeders.

I have, of course, since learned that as well as the many shelters out there all bulging at the seams, there are many dedicated breed rescue organisations too, including Scottish Terrier Rescue – South Africa who do amazing work.

So, although I still have my old lady pedigree Scottie – Holly, almost twelve-years-old now, she was the last dog that I paid for, so to speak. Then as well as cover model Bruno, who is almost nine, there is Harry a seven-year-old rescue and Lola, who at two-years-old is the youngest, the naughtiest and cutest Scottie rescue girl ever! Since her arrival in October, she has added another level of chaos to the house!

Is Bruno a clown or a cuddle monster?

Most definitely a cuddle monster!  I have many visitors and they all know that part of the deal is that Bruno will more often than not be their sleeping partner for the duration of their stay, lying next to them with his head on his own pillow and all!  His favourite visitor has to be his Granny who visits at least once a year from Scotland and always comes bearing gifts!

Who takes care of the furkids when you travel? Do they ever get to travel with you?

I am lucky enough to have a couple of fabulous house sitters who are more like family and have been in my life for 15 years or so and who are not only familiar with the dogs and their routines but have a mutual love for each other too.  Luckmore was employed on the condition he loved dogs and so is also with them all day during the week. They do not travel, unfortunately, as they do turn into absolute monsters in the car. So, anything further than the local beach is non-negotiable!

The Purple Kennel Project is about to commence its 4th season as an aid to support animal welfare organisations. Please tell us how the project started and what inspired you.

Since becoming aware of the epidemic situation, we face in this country regarding animal welfare around 15 years ago, like many people out there I had always tried to ‘do my bit’ as it were.  Whether that be fundraising, collecting food, selling raffle tickets and generally drumming up support where I could. I was never emotionally strong enough though to get physically involved out there in the field, the people that do that and experience cruelty and trauma every day are my true heroes.  We all have different strengths though and whilst I could not be THAT person, I still wanted to help!

With the arrival of social media, although it was a positive thing in terms of communication, it became harder to ignore the daily plights of all the animal welfare organisations and I would find myself donating R100 here and R50 there and it would easily mount up. Although I liked to think I was making a difference I wasn’t really sure HOW in the grand scheme of things and whilst my donations were not conditional, I wanted to see where they were going.

At this point, when chatting to friends, I realised there are two kinds of donors. Those like me, who have a small amount to give, but would just like to know HOW or WHERE we are making a difference to the animals. Then there are those who do not need that info and are happy to set up direct debits to contribute to the general running of welfare organisations. Make no mistake, the funds needed are not all directly related to animals – there are salaries, rent and electricity to pay too!  I understood completely that welfare organisations could not report back on where every cent was spent and so I came up with the idea to focus on a specific need within animal welfare and create something where people could see exactly what a difference their hard-earned cash made, which would hopefully, in turn, encourage others to do the same.

I chose to focus on providing kennels. During winter time the Cape storms can be quite brutal and whilst my own rescues snored loudly beside me, I would literally lie awake at night thinking of all the dogs in townships and elsewhere who did not have warm shelter. I imagined a world where I could not only support the many welfare organisations and the amazing work they do but one where donors would know exactly what a difference they had made! In April 2016 Purple Kennel project was born, we started with sending out just 5 a month, thanks to grateful donations from friends mainly, but word spread and by the last year 2018, we were sending out around 100 a month! I still find that hard to believe myself … but it is true!

We often read about the famous Deck Parties that help support your project. Are the occasions dog-friendly?

I am very social and love entertaining, especially outside on my deck and with many of my friends also being animal lovers, it has just become the norm now, instead of chocs or flowers they bring dog food that we can donate!  Call it an admission fee if you like … or perhaps just a good excuse for a party!  Although my own four dogs are very much part of the social gatherings, they are quite particular about any other four-legged visitors entering their patch.

What are the plans for the future of the Purple Kennel Project?

The project has grown more than we could have ever imagined possible! This is thanks to our many generous donors who love the fact that they get to see a photo of the happy furry-face, that is the lucky recipient of their sponsored kennel and who’s life has quite literally been changed forever!

For the first two seasons, we used wooden Kennels that not only took longer to make but were also heavy and cumbersome to move from A to B. We also had the job of painting them.

Last year though, we were lucky enough to be introduced to a company called Poly box, who make the moulded electrical boxes we see everywhere and who agreed to make eco-friendly kennels at an affordable price, on condition they are used for animal welfare. These kennels made from recycled materials are light and easy to carry, do not get chopped up for firewood and keep dogs warm in winter and cool in summer!

Last year we almost doubled the number of kennels we sent out the previous year and have now worked with 37 different welfare partners!  Going forward, we would, of course, like to build our now firm foundation and our grand total of 1117 kennels so far distributed. We cannot deny we are eyeing that 2000 mile-stone!

We do have to be realistic with our goals in that we do run this project in our spare time, whilst running a very busy Tourism Sales & Marketing Consultancy – thankfully though, whilst I am usually running around somewhere, Luckmore my dedicated assistant is office based and co-ordinates the donations, kennel branding, deliveries and collections like a well-oiled machine. He also ensuring every kennel leaves with a personalised label from the donor of course!

All I can say is watch this space! With peoples continued support, the sky really is the limit, there are literally thousands of animals out there without shelter and who need our help!

If you could give one piece of advice to someone wanting to make a difference in this world, what would it be?

“DO SOMETHING” is my one piece of advice… So many people scroll the pages of Facebook and other social media forums no doubt saying that favourite South African word “Shame” under their breaths as they see yet another starving dog or the hundreds of pleas for adoptions, but not that many stop to think about how THEY could make a difference.

In fact, it is sadly often the very opposite. There are many ‘armchair critics’ out there who tend to be very vocal and critical of those that are out there trying to make a difference and yet they sit there doing nothing themselves!

Not everyone is perhaps in a position to start an organisation like ours or to deal with sick and neglected animals on a daily basis, but there are other smaller things people can do that will make a difference.

My favourite quote is this: “Do a little bit of good where you are … it is those little bits of good when put together, that overwhelm the world” Desmond Tutu