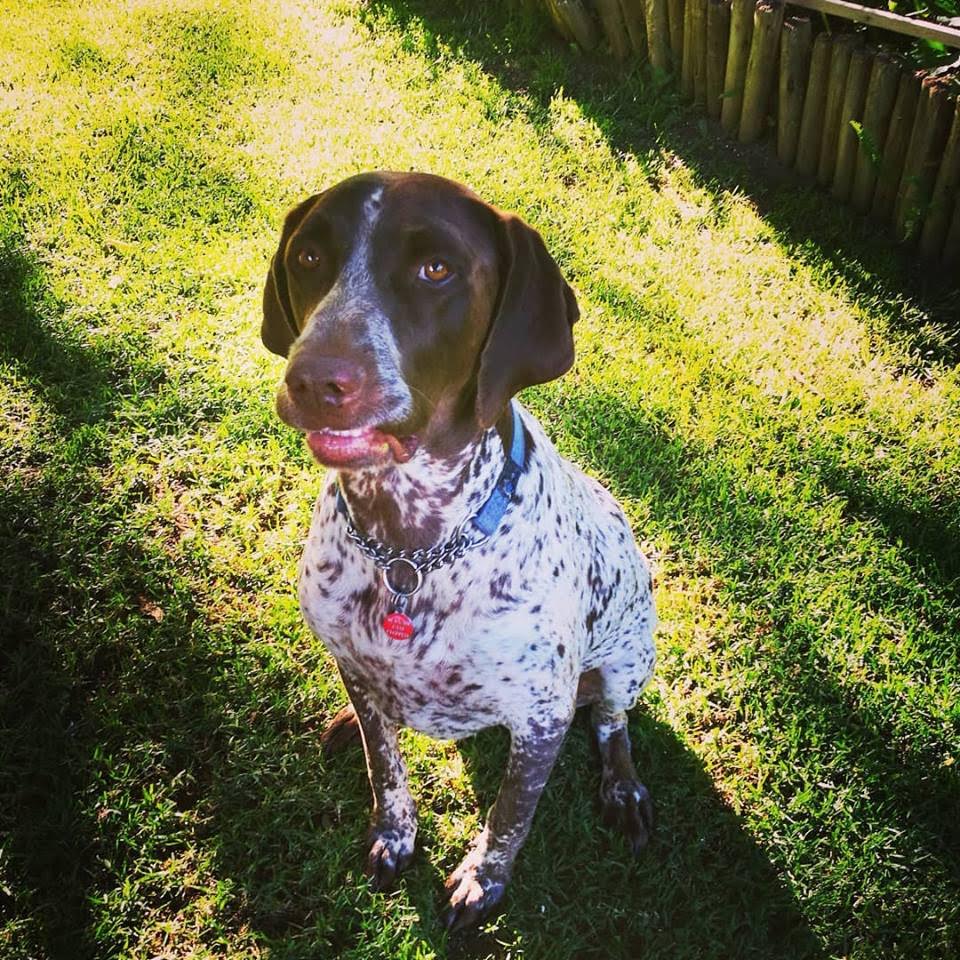 Buzz arrived in our lives, very shy and very quiet. Tina Marie Mudd from “Rescue Me” had answered our request for a rescue German Shorthaired Pointer (GSP) and brought Buzz around, having

found us suitable and he was left in our care, as forever parents. At first he ran around sniffing here and sniffing there, as dogs do when introduced to a new environment.

I noticed that he was very shy, and rather timid, but very obedient. He never ever looked me in the eyes. As the days became weeks Buzz became more confident in Bets and I, and very slowly settled into our daily routine.

At first, Buzz ignored our older doggies, which are 16 years old and still in very good health. Buzz would run with the pack, but kept quiet and to himself.

Bets and I were wondering if Buzz had a voice, since he never, ever barked. Then, one evening, we heard a strange dog barking… I rushed outside and saw Buzz peering into the distance.

“Buzz, did you just bark?” I asked him. He turned, and for the first time in two months looked at me, very briefly, and wagged his tail ever so slightly.

This super-super-super-super intelligent boy, in the first month, never played, never really relaxed. It was as if he had worn a mask of rigidity his whole life. The scars on his back and stomach revealed the discipline he had received from his previous masters. By now I knew every square millimeter of Buzz. (Even below his tail, I promise…) Through the past seven months, it has taken tremendous effort to coax him out from behind his mask.  NOW, YOU SEE IT IN THE EYES… Buzz has become a friendly, soft, puppy in a huge body, playful and joyful, and has caused me to burst out laughing more than ever when he starts his clown routine. CATS? In the beginning, he had a tendency to seek the cats – three months later, after some stern words, maybe three warnings, the cats and Buzz sleep next to each other.
We found out by total accident how terrified he is of any object held high. One day, Bets was swatting a fly in the kitchen, Buzz was present. When he saw the swatter he cringed, tucked in his tail, pulled in his bum and quickly, in a cringing attitude became scarce, with a terrified look in his caramel eyes. This tells me he had been beaten…
Bets and I have played with Buzz for hours at a time every day over the past eight months. Slowly he has become more relaxed and confident, by the glances we received.

As Buzz made his way into our lives with humongous joy and bags full of laughter, he would produce a glittering diamond by way of a gift to us. No due notices, no hesitating manners. All of a sardine, he would, one day, out of the blue, step forward and totally surprise us , nay, floor the both of us, leaving both Bets and I speechless and astounded!!

Now, we look at each other as good friends, buddies, and hunting mates. He does not challenge me, nor do I challenge him.
Out of his own, when I use certain intonations of my voice, he grabs his sleeping pillow and shakes it about while prancing around like a horse with a baboon shaped tail. I am so pleased he did not have his tail chopped off. His tail tells stories, his mindset, his character, instincts, everything. He understands whispered instructions to the hilt and I have found myself feeling a bit odd by his sixth sense. He does a job before I tell him – not always though, but when he does…

One Sunday we took Buzz out on a special picnic day to Vaaloewer. Buzz said I must tell you he had an excellent day… first sniffing out and seeking a pair of otters, then he sniffed out and pointed to a monitor lizard of about 1 meter. He actually chased the lizard up a tree. Standing upright, as far as he could stretch against the tree trunk, he barked in a very feminine voice at the lizard. I swam with Buzz and he swam on his own, running, playing and eating like you could not believe. Going home, Buzz had a great snooze.

Having become used to our daily routine, I now know Buzz can read time. He talks to the neighbor’s dogs at 6H30. He greets the gardener, the maid and the propeller workers every single morning by means of a stiff, trembling tail. He will eye each and every one of them, and only give the tail-up, wagging signal that all is A-OK and checked out thoroughly, after having had a deep and thoughtful sniff of each person’s, butt. Yep, I get “the look” as he trots by, highly satisfied that his own personal kingdom’s servants are all in good working order for the day ahead.

Every day I get nudged round about 4 o’clock… so, we collect a pop gun whilst he leads, excited for the “hunt”. He runs ahead, straight to our “hide” (which I chopped out amongst our overgrown Aloes). Being a gentleman, he lets me enter first and patiently sees to it that I make myself comfortable. He then settles down next to me and takes his “ Royal Highness” place. Next, we compete for the best view through the aloes. Shaking like a leaf, he peers through the Aloes pointing here, then there, unwavering. I  take the pop gun and aim while he becomes stiff and rigid instantaneously. His pupils widen to maximum and the most intent expression is etched on his face. There we shall stay for an hour until the “hunt” is over. Sometimes, Bets will hide in another place, holding his rubber chicken. As soon as the shot sounds, she chucks the chicken high into the air and Buzz will race off to fetch his “catch of the day”.

SPAR must be Buzz’s favourite grocer, no doubt about it. Why?

Coming home from SPAR, Buzz accompanied, as he would view it, the “hunting wagon”. Bets parked the car and Buzz sauntered around the wheels, sniffing here, then there. As the boot was opened he stood by, to attention, waiting for the servant (that’s Bets, by the way…) to dig out the day’s hunt – a SPAR grocery bag filled with all types of goodies. Without hesitation, he gently, but firmly, took a bag, ON HIS OWN, no prompting, not a word from us, gathered the biggest mouthful of plastic and trotted up the stairs, into the kitchen and set it down carefully.

You could have knocked us over with a feather duster…

There is a catch to this story, however… Buzz lets the side down by being as corrupt as one can get.  He will plonk his behind down, give you the dead eye stare, bag firmly clasped in doggy teeth. Every expression reads: “NO DOGGIE BISCUIT – NO BAG!!”

End of story. One may plead, beg, scold, do or say what one wants… the bag stays put!

However, produce a doggie biscuit and an amicable exchange takes place. One cookie, one released bag. Satisfied that he has been “ paid-off” one cookie right there, and he will trot back to the car, collect one more bag, to once again return to the kitchen (where his corrupt side will once again sneak out and become victorious).

I can’t express how much love, joy and laughter Buzz has brought into our lives… and we can hardly wait to find what other surprises he has in store.

He has, by now, become a relaxed and fairly obedient, very loving gentlemen, and sweetheart with the softest lips, when taking a doggy cookie from our hands. What a gift!!! A gift from God and the GSP Rescue Me people!!!!!