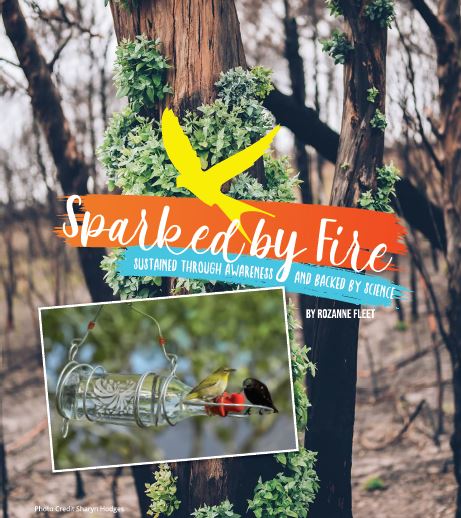 During June 2017, a horrific fire ripped through the Garden Route destroying over 1000 homes, claiming 7 lives and wiping out around 18 000 hectares of forest and fynbos.

As the smoke cleared and aid began flooding in for people, pets and livestock, it occurred to me that it wasn’t only people who had lost their homes but wildlife as well. I noticed a huge influx of birds in my parent’s garden fighting over the feeders and consuming far more food than usual. I thought that we could encourage people to feed the hungry birds that had obviously moved into the unburnt areas and were now competing for food. But in the wake of such a disaster, where people had lost everything, how do you ask them to go and buy something as seemingly trivial as a birdfeeder?

I decided to email as many companies as I could and ask for assistance. The response was rather dismal, except for one lady who phoned me almost immediately wanting to help. Elaine, from Elaine’s Birding and Wildlife Products, initially said that she had 85 feeders that she would like to send me and I was absolutely delighted. As the enormity of the disaster sank in, Elaine’s generosity grew and I think she ended up sending us well over 400 feeders, 100 nectar bottles, nesting boxes and a mountain of suet! A truly incredible donation from one company! This later inspired donations from other amazing individuals which allowed us to purchase more feeders and additional food.

The next hurdle was getting everything here from Pretoria as all means of transport were flooded. Thankfully Spartan Trucks came to the party and managed to keep everything aside for us so it didn’t get lost in the masses of general donations.

We then appealed to people on Facebook to become “Feeder Guardians” and remain committed to keeping the feeders stocked and birds fed, using The Computer Shop Plett and Knysna as distribution points. The response was quite overwhelming with so many people wanting to help our littlest fire victims. People who had lost everything came to collect feeders knowing that the birds had lost their homes too.

For about 4 months we fed in unimaginable amounts, sometimes up to 15 liters of nectar a day in one garden alone! Our guardians were all inundated with hungry birds and were battling to keep up, so we also facilitated additional donations of fruit, sugar, seed, mealworms and even nesting bags of feathers to help the birds as breeding season arrived.

The most wonderful part was the amount of joy that the birds were bringing people during a dark and difficult time. They gave people a reason to get up in the morning and realize that there is in fact life after the fires. If the birds could come back and carry on amongst all the devastation, then we could too. We received messages from people saying that they’d been battling with depression after the fires and the birds had brought them back to life!

We suddenly had a whole community filled with compassion and besotted with the birds, and people had so many questions wanting to know more about them and how we could best take care of them. I had no previous knowledge of birds and thankfully Dr Mark Brown from Nature’s Valley Trust, a well-respected ornithologist (and the most patient man I know!) was willing to assist. He has been unbelievably supportive and a huge help, offering valuable knowledge and advice whenever we needed it.

There is a quote that says, “Mother Nature is the ultimate truth that the show must go on” and after a few months and some good rain, nature started to recover. By mid-spring we started to see some regrowth, spring flowers were in bloom and the demand for food started to decrease as the birds returned to nature! I think it was a bitter sweet moment for our guardians as they so enjoyed having the birds visiting, but at the same time it was wonderful to know that they weren’t dependent on us anymore.

Mark noticed the wonderful awareness that our Facebook page was generating and decided to join me as admin as we transitioned from Garden Route Bird Relief to a more long-term page for birds.

Since then, the page has grown with so much support and enthusiasm from our followers. We try to keep the page fun, lighthearted and interactive, offering a fresh approach to birds, but at the same time offering important advice and sound knowledge that is backed by science and research. We aim to make people more aware of the birds that share the beautiful Garden Route with us, highlight how to responsibly feed and enjoy them in our gardens, as well as raise awareness about the need to conserve and look after our birds and the environment in which they live.

“Many people ask the question “What can I do to help conserve our country’s birds?”. One of the easiest things one can do is introduce a family member, friend, colleague, or neighbour to birds.” ~ Mark Anderson CEO BirdLife South Africa.

We have lots of exciting ideas in the pipeline and really looking forward to the future of this page that the caring residents of the Garden Route have all helped to create while helping our birds when they desperately needed it!

Personally, I’d really want to say a HUGE THANK YOU to everyone who got involved in helping us, even in the smallest way! I always said that no one can help all the birds, but everyone can help some of the birds… and we did! Our Garden Route birds are so lucky to have so many caring people looking out for them.