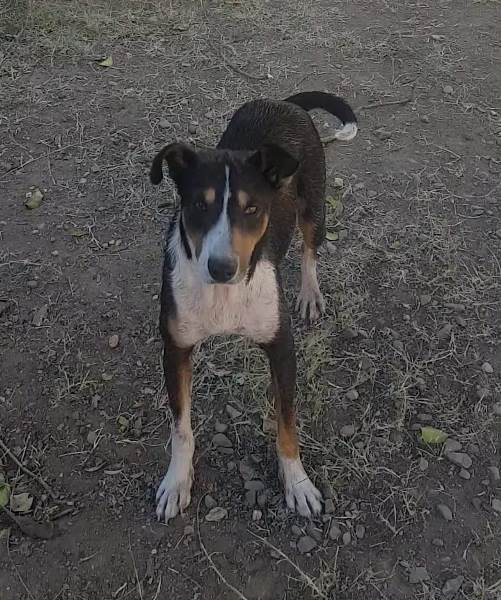 Late in June 2018, the Camdeboo Sterilisation Initiative (CSI) was contacted by a kind person who was taking her domestic worker back home to the township, when she noticed a dog being tied at the side of the road, with a group of children gathered around it. She stopped to investigate what was going on, upon which the children ran away.

She could see that the dog was hurt, as it was bleeding from the nose and also had minor wounds on its body. Taking action, she loaded the dog into her car and took it into the local Vet, as CSI had agreed to cover any costs involved, and to take over the care of the dog, going forward.

What met us upon arrival at the Vet, was heartbreaking; a mangy, bleeding bag of bones, yet still wagging his tail, upon hearing a kind voice, despite the ordeal that he had just suffered at the hands of man. We often just stand in awe at the amazing forgiving creatures that dogs can be. How soon so many of them just simply trust again. Yes, we do get the broken souls who sometimes take weeks, months or even years to heal, but as a rule, I have not seen a species as forgiving and not prone to grudges, as dogs.

We named him Hank. Hank spent a day at the Vet being checked out and was kept for observation. He was diagnosed with ehrlichia and possible blunt force trauma to his face and, of course, mange and starvation, which was very obvious and visible. He also had a bad case of worm infestation.

Hank was taken into foster care by CSI, given medication for his ehrlichia and weekly medicated dips and baths for his mange and, of course, loads of TLC and three high quality meals a day. We knew that Hank was a special boy right from the start. He very soon realized that he could trust us and was just so undemanding and grateful for every little bit of love, attention, food and treat that he got. Also, he was such a good boy when being dipped and bathed, as if realizing that we were trying to help him. He picked up weight from 9 to 15 kg and is now a happy and healthy boy.

With his mange being contagious, he had to be quarantined for the 1st month, while being treated. He just took everything in his stride, seemed quite happy in his enclosure with his kennel, and being covered with a warm blanket at bed time – oh, he LOVED his blankie. We introduced him to playing with a tennis ball and he almost immediately grasped what was expected of him and now loves playing fetch. He will run back to you and hold the ball very lightly in his mouth for you to retrieve and throw again. We do suspect some Border collie in the mix. We also gave him a soft doggy toy which he nuzzles and plays with very gently, and sleeps with in his kennel, but not destroying it, like many dogs have the tendency to do with soft toys. He is just such a gentle soul.

After the mange had cleared, we slowly introduced him to members of the pack, one or two at a time. He was an absolute gem, with very good social skills, and, very soon, started playing with the rest of the pack. He became a hit, especially, with the ladies, be that canine or human. Come feeding time and I was on my way to Hank’s enclosure, I had the girl dogs lined up wanting to come with me to go visit Hank and play with him. He was always very excited when I brought him some doggie company and so we soon started calling him “Hank the Hunk”.

This most special boy with a heart of gold, holds no grudges and has an awesome personality. He is up for adoption to a very special home. He is kind and loving, yet not overly demanding. He does this little “dance”, prancing around when excited, earning him the nick name of “Twinkle Toes” from his foster Mom. Yet he is never boisterous. He is not a barker, except when he has reason to tell you something. He has moved into the home among the pack of various males and females in his foster home and gets on very well with everyone. He is most content to sleep in his doggie bed in the bedroom with his foster parents. We are sure he will enjoy cuddling with you under the duvet on a cold winter’s night, if given the opportunity, but, knowing that this is not allowed in all homes, we are not encouraging this.

Hank is one of those dogs that leaves a paw print on your heart, that is never forgotten, and would easily have been adopted by his foster home, had it not been that we just want the best home in the world for him, where he can be the centre of attention, or at least part of a smaller pack, where his gentle soul is not smothered a little by the many (some hooligans) that he has to share his foster home with. We believe him to be intelligent and highly trainable – a true asset to any home and humans that will be part of his journey going forward.

6 weeks after Hank was rescued, another dog was found tied up and stoned to death at the exact same spot that Hank was rescued from. We dread to think that this might possibly have been his fate, had someone not driven past and been vigilant enough to stop, and investigate and take action. The latest case is currently under investigation and the same perpetrators are suspected in both cases.

If you think you might be that special person or family to complete Hank’s Happy Tale, and can offer him a forever loving home, please contact 072 1762 175 or erma.voigt@yahoo.com . His story can also be viewed on our Face Book Page https://www.facebook.com/CamdebooSterilisationInitiative