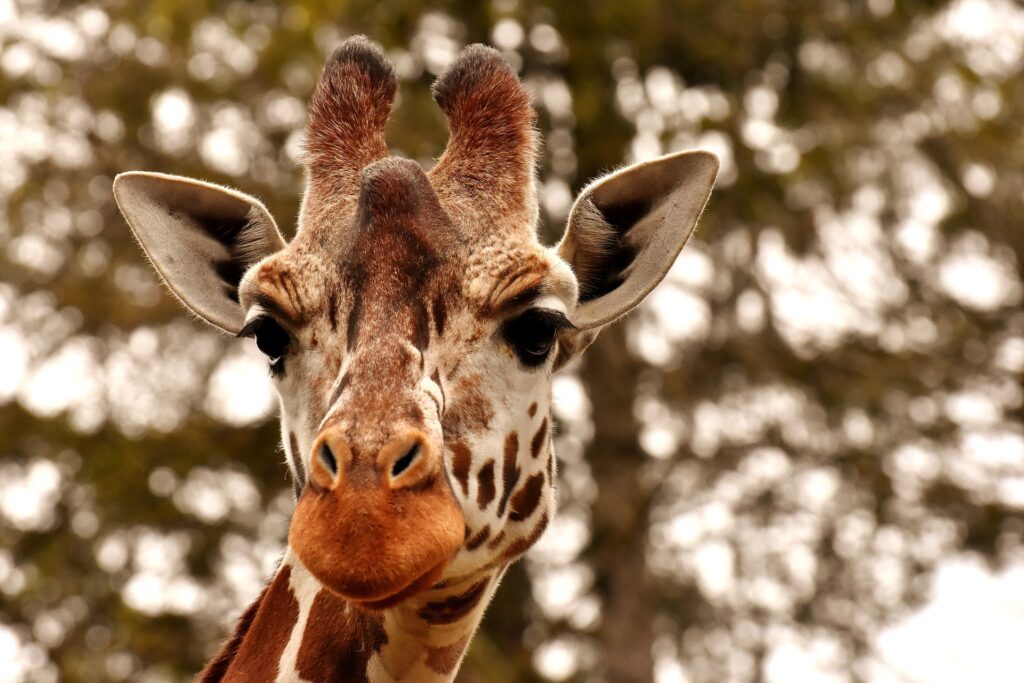 The scientific name for a giraffe is Giraffa camelopardalis, and it comes from the ancient Greeks’ belief that it looked like a camel wearing a leopard’s coat.

Giraffes are found in the dry savannahs of Africa, where they roam among the open plains.

The giraffe is the tallest mammal in the world. An adult male (called a bull) grows to around 5.5 meters. The tallest giraffes ever recorded have been up to 5.9 meters.

Even new-born giraffes are taller than most humans. These gentle giants are well known for their long necks. An adult male giraffe can weigh anything from 1200 kg to 1900 kg.

Females (called cows) are smaller and grow up to 4,3 m and weigh 830 kg on average.
A giraffe’s height is helpful for keeping a lookout for predators, such as lions and hyenas.
Their excellent eyesight, too, allows them to spot predators from far away.

Despite their long necks and being tall, giraffes still only have seven vertebrae in their necks – which means that a giraffe’s neck has the exact same number of bones as a human neck. Each individual vertebra is super-sized, measuring up to 25 centimetres long.

The giraffe’s spots on his body are much like human fingerprints or snowflakes, no two giraffes have exactly the same pattern.

Both male and female giraffes are born with two, hair-covered horns called ossicones.

These horns, or ossicones, lie flat and are not attached to the skull to avoid injury at birth. They only fuse with the skull later in life.

Male giraffes engage in a ritualized display of dominance called “necking” that involves head-butting each other’s bodies to see who is the stronger.

These fights aren’t usually dangerous and don’t normally result in any injury, and end when one bull admits defeat and walks away. Giraffes very rarely fight and are very peaceful animals.

Giraffes spend most of their lives standing up and even sleep and give birth standing.

They usually stay upright while sleeping, only needing 6 to 30 minutes of sleep in a day. They often take quick naps that may last only a minute or two at a time.

It was previously thought that giraffes are quiet animals that don’t make any sounds, but research now suggests that giraffes, in fact hum, mostly at night, with the occasional snort, hiss or grunt, as well as make low pitched noises that are beyond the range of human hearing.

A giraffe’s foot has a diameter of approximately 30 cm. These huge hooves prevent giraffes from sinking into loose sand despite their great weight.

Giraffes’ tongues are darkly bluish-purple and can be up to 45cm long.

This extra length allows the giraffe to use their tongues to grab and hook leaves from hard-to-reach trees.

A giraffe heart can weigh up to approximately 11 kilograms and is the biggest of any land mammal.

This huge heart is used to pump 60 litres of blood around its body every minute, at a blood pressure of twice that of an average human.

To protect the giraffe’s brain from sudden changes in blood pressure when it lowers its head to drink, the jugular vein has a series of one-way valves to stop the backflow of blood, and elastic-walled vessels that dilate and constrict to manage the flow.

Giraffes are not completely defenceless, although they’re more likely to run from danger than fight back. A swift kick from one of their long legs can do serious damage to any predator.

Giraffes can run up to 55 km/h at full speed, but only over short distances.

Unlike most other four-legged mammals (like horses), giraffes walk by moving both legs on the same side of their body together. This movement or walk is known as “Pacing”.

Strangely enough, when a giraffe breaks into a gallop, its odd walk disappears, and it runs in a more ‘normal’ way.

Giraffes are very social animals and roam around in groups, called towers.

These groups, also called a herd of giraffes by some, typically have around 10 to 15 members and are led by an adult male. The other members are normally females and young males.

Giraffes in the wild tend to live between 20 to 25 years. In captivity, they can live longer and have been known to reach 40 years old. Giraffes only need to drink water once every few days, even when the water is available. Despite their size, the giraffe has a plant-based diet, and they mostly enjoy eating fresh leaves and twigs from the tops of trees. Most of their water source comes from their plant-based diet

.Giraffes require over 44 kg of food a day, so they spend most of their time eating.

Female giraffes can become pregnant at around 5 years old and will carry a baby for 15 months. Studies suggest that some female giraffes often return to where they were born to give birth. Female giraffes give birth standing up, which means that these new-borns will fall about 1.5 meters to the ground. Luckily, baby giraffes can stand up and even run within an hour of being born. A baby giraffe is called a calf. Calves are about 2 meters tall and weigh approximately 70 kg. Within a week, the giraffe calf will start to sample vegetation. Studies suggest that in some populations, over 50% of all giraffe calves do not survive their first year. Despite attempts from the mother to protect the young, many calves are killed in their first few months as a result of predators like lions, hyenas, wild dogs and even leopards. Giraffes are probably one of the biggest pollinators in the world, thanks to their great height. As they are feeding on trees and walking around, they inadvertently transfer genetic material on their muzzles from the flowers of one tree to those of another.

While giraffes are under less of a population threat than some other animals, their population has declined 40% over the past 5 decades.

Two of the biggest factors in the decline of the wild giraffe population are poaching and habitat loss. The first giraffe to make its way to Europe was brought there by Julius Caesar from Alexandria in 46 B.C. as part of a triumphant return to Rome after years of civil war.