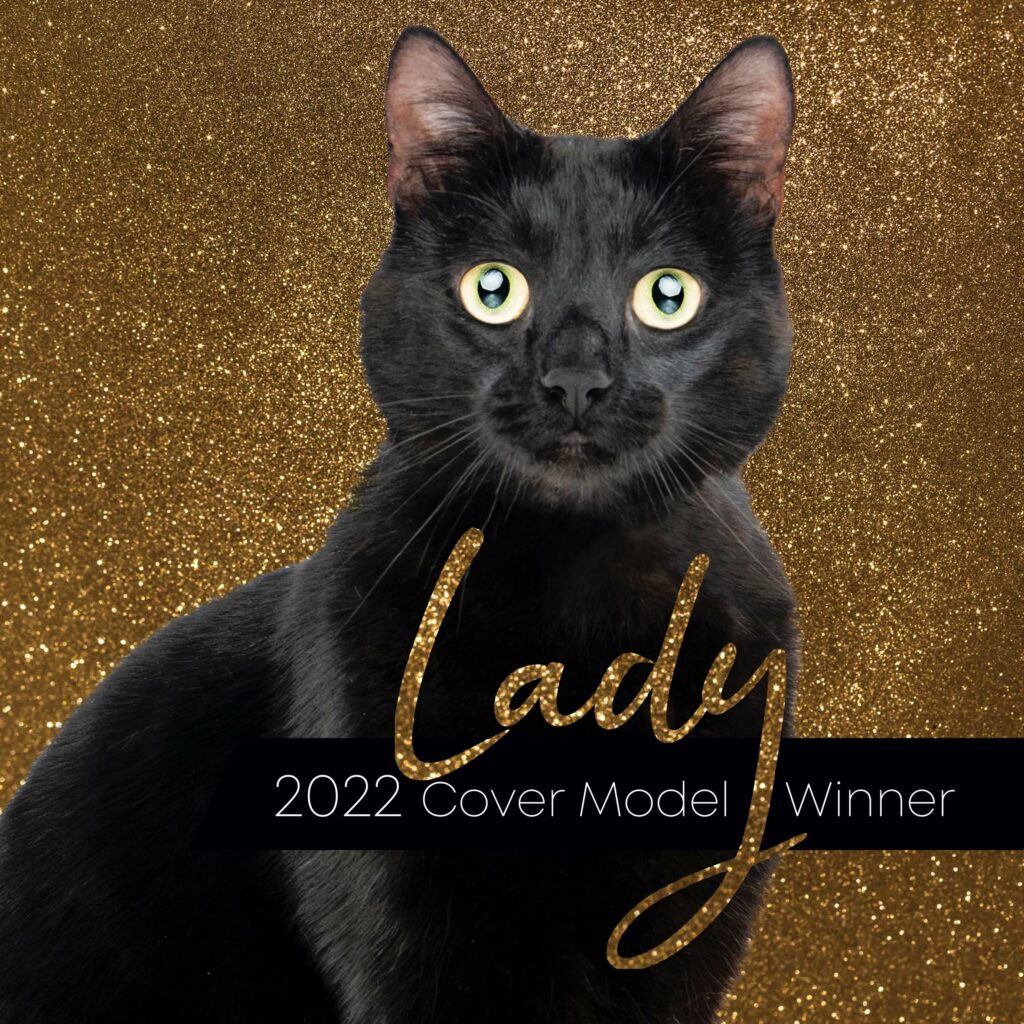 I named her Lady after the kitten I couldn’t keep as a child.

They say, you don’t choose a cat, the cat chooses you. This rings true more often than you can imagine. Cats are funny little creatures. I don’t mean “ha ha” funny, although their antics may sometimes merit a smile or a giggle. What I am trying to say is that cats are odd and unpredictable – completely beyond understanding. I think this is what makes them so uniquely suited to certain people. There are stories all over the internet telling tales of people who would never have considered taking in a feline and ended up being grateful that they gave these classic counterparts an opportunity.

In the case of Alison and Lady, you can imagine our surprise to have another black cat peering from our cover this year. It’s a great testament to the decreasing superstition toward black animals, statistically shown to be less popular than other animals. Lady has been pursuing this cover shoot for a while now and I think the photos are amazing!

Here’s what Alison and Lady had to share with us:

TELL US A BIT ABOUT LADY. HOW OLD IS SHE AND WHY DID YOU NAME HER LADY?

If there’s a question one shouldn’t ask a crazy cat lady, it would be “tell me about your cat”. I’d be writing you novels for the rest of your life. Lady is one of 3 feral felines who I rescued in 2019. She had 2 siblings, one being a ginger and the other a black and white kitty. There were workers at the company where I work, who were taunting and abusing these 3 kitties, who were hiding in some pipes being used for steel construction work. They were using a can of spray and a lighter to get the cats out of the steel pipes they were hiding in, just for the fun of it. I couldn’t take it and spent my teatimes and lunch breaks to try and get the kittens to come out of there, so that I could get them to safety.

I was able to catch her two siblings in a week, but Lady was very stubborn. I was ready to give up after catching the first two kittens, but I couldn’t live with the idea of her being there all alone. I brought her food, played cat videos for her, and yes, I meowed to her (a full-on meowing conversation), hoping she would understand what I was saying (I am now fluent in speaking cat). I set up traps with tuna for days, but Lady was just one up. The thing that got to her like a drug was milk. This secret weapon lured her out and on the 13th of February, I was finally able to catch her, with this delicious trap.

I had my dad on a rollercoaster most of his life. If it wasn’t me bringing home injured animals, it was my mom. They say the apple doesn’t fall from the tree.

I decided that she would be my early Valentine’s gift, from me, to me. She gifted me with lots of spits and hisses, I mean what more do you need in the month of love? I took her to the vet for a check-up where they determined that she was in good health. She got all her shots and tests done that were needed, and we gave her a nice warm bath when we got home. Ever since that day she has realised that I would be the person she could trust, and we’ve been bonded ever since. She would come looking for me in a room full of people and will hold on tightly to me if she’s anxious. She’s my child and I love her dearly.

I named her Lady after the kitten I couldn’t keep as a child.

ANY PETS GROWING UP?

I had a few pets growing up. Four dogs to be exact, and one cat that only I was allowed to love and hold, as I told my siblings. I also had two pet rats that I had saved from being abused, when I was still in school.

I had my dad on a rollercoaster most of his life. If it wasn’t me bringing home injured animals, it was my mom. They say the apple doesn’t fall from the tree. So, yes, I got it from my momma. We weren’t always able to save them, and if we did, we couldn’t keep them, because we would have had an entire zoo. We would name them, love them, care for them, and clean them for that short while, which cost my dad an arm and a leg, to be honest, but if it meant that we were happy for that interlude before they went to their forever home, he did it, no questions asked.

LADY IS A REAL LITTLE ADVENTURER. WE OFTEN SEE HER GOING TO WORK WITH YOU ON INSTAGRAM. GIVE US AN IDEA OF WHAT A NORMAL DAY WOULD LOOK LIKE IN THE LIFE OF LADY.

Yes, she’s a spoiled brat, but she is my brat. I wasn’t allowed to keep Lady as the complex I was living in was no longer cat-friendly, but I wasn’t going to let her go, even if it meant I had to sleep in my car. So that’s how Lady started coming to work with me. I had to hide her at home to not alert the neighbours that I had a cat, but at the back it was a party. She had a 5m leash which was long enough to explore the whole yard but short enough for her not to jump to the neighbours. She’s now leash free as she knows that she’s not allowed to jump the walls.

A normal day for Lady would be waking up at five. Deciding what collar and bow/ jersey – depending on the weather – would be worn, as it will always match the colour of mom’s top. A game of cat and mouse will be played. Me being the cat catching the mouse (Lady). This is also the reason why I’m late for work most of the time.

When we get to the office, Lady will run and jump on the director’s desk, which consist of a bed, food, water and litterbox, and all that’s needed for a busy cat like her.

Her duties include bird watching, lounging on laptops, changing setting and deleting programs (IT). She is our company stamp. She stamps our paperwork with three paw prints. Some days she shreds important documents, other days she proof-reads documents (by laying on them). She organizes cleans desks (slaps everything onto the floor) and occasionally a cat nip party is thrown on the director’s desk. She pre-positions the glasses of very important people (CEO), so that he can look more presentable and professional. She also supervises me for at least half an hour making sure I do my job (which means she distracts me).
After work we just go home to cuddle.

DOES LADY EVER GET UP TO MISCHIEF? IF SO, WHAT HAS SHE DONE?

I don’t know if Lady gets up to mischief… would you classify the following as normal behaviour? She would roll in the sand when she just had a bath and blow dry session. She will run away as soon as you try to stop her and do it all over again. (Lady isn’t afraid of a hair dryer but she is afraid of a vacuum cleaner.) Has your cat managed to break a litter box? Because Lady has!

IF LADY COULD HAVE ANY CAREER, WHAT WOULD IT BE?

Lady is a real madam – she’s got the “make love to the camera” kind of eyes, face and pose. She’s fierce and knows just when to unleash that inner panther of hers. So, I’d say her career would be a Victoria’s Secret model, doing the “cat walk”, being a runway model.

BLACK CATS HAVE A BAD REPUTATION DUE TO SUPERSTITION. WHAT WOULD YOU SAY TO SOMEONE WHO IS OF THE OPINION THAT BLACK CATS ARE BAD LUCK?

A black cat crossing your path simply means that the cat is going somewhere. We’ve all walked underneath a ladder or broken a mirror, yet here we are. We face so many challenges daily where nothing goes our way. We all have those days, so why blame it on the black cat crossing your path. We’ve all been in that boat where we needed to be given a chance in life to show who and what we are, what we are capable of and that there’s a lot more to us than meets the eye. All this black kitty has done is bring me joy and blessings.

If you’ve ever wondered how many outfits Lady owns, the answer is, A LOT. This little feline has a wardrobe full of collars, bows, leashes, accessories and even gets her nails done every other week. She’s definitely on our “watch list” to see which designer she’s wearing next. However, a little birdy told us that Alison’s mom, Laura, is her favourite. We do hope that Laura will purrrrsue her talents and we can’t wait to see this lady on the Instagram catwalks in the year of the Tiger!

A black cat crossing your path simply means that the cat is going somewhere. 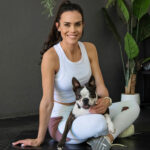 Stephanie On Mila + Movement And Motivation