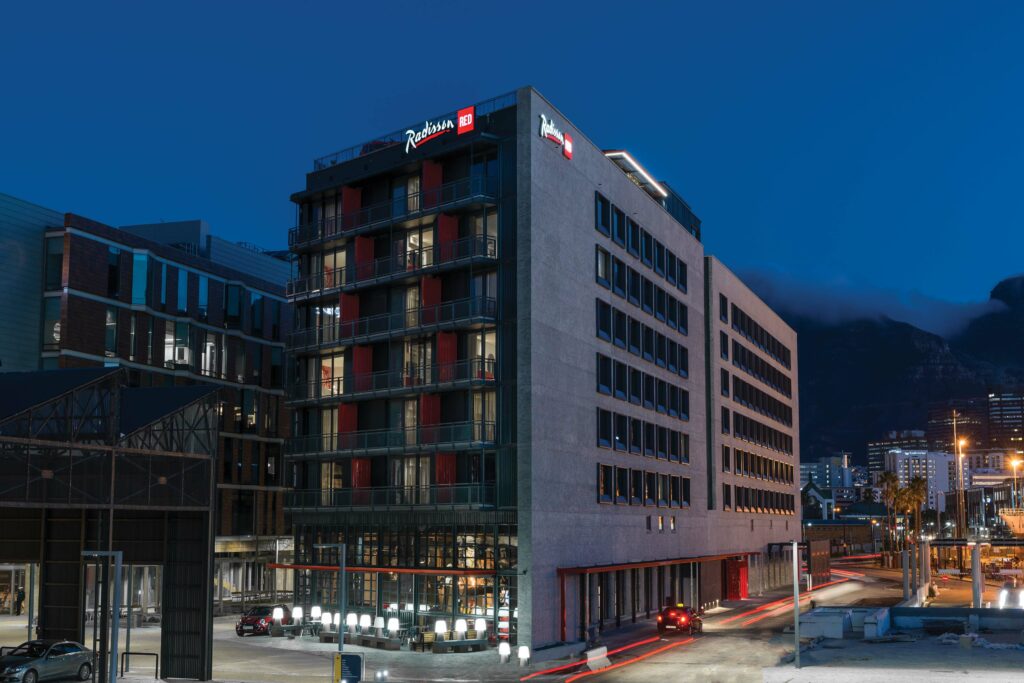 Luxury travel writer, brian berkman, searches out the fabulous and often affordable options available to you and your pets. Julie, his rescued mixed-breed doggie-daughter insists on joining them.

Although many hotels are now realizing that people want to travel with their pets whenever possible, the Radisson RED at the V&A Waterfront in South Africa’s Mother City, Cape Town, decided this would be a singular part of their identity from the get-go.

While Baxter, the Boston Terrier who “signs” welcome letters and features in their corporate design is no longer on the team (he and his owner moved to another property), the spirit of Baxter is very much alive and well at this high-energy property in the Silo area of the V&A Waterfront.

The lobby area of the Radisson RED instantly spells out how this may be different from other hotels. There is no traditional reception desk, but rather a free-flowing area on the left, where staffers are ready to check you in. There are giant red beanbags instead of couches and a natty red-coloured fridge, too. On the opposite side of the lobby is a long table at which people work or just hang. When we visited there previously there was a ping-pong table there, which, I was told, will return soon.

If ever a hotel was built with millennials in mind, this is it. The important stuff: lightening-speed internet and fully interactive big-screens in the rooms, as well as fashion-forward design, makes this property pop with colour and energy. The roof top features the Red Roof Bar in a converted truck, a long lap pool, and a kitchen serving pizzas and grills. There is also undercover seating on the roof and, with views over the Waterfront and 360 degrees around it, this is a prime party space. There are yellow hexagonal shaped plastic chairs and tables that are as comfortable to sit on as they are great to look at, while a perimeter border planted in red plastic crates adds greenery.

A table and chairs works as a dining and working area. The wall-side consul contains a coffee plunger, freshly ground coffee, a kettle and takeaway coffee cups. The bathroom, which features a walk-in rain shower with an additional high-power hand shower, has quality bathroom amenities at the ready for your use.

The ground floor eatery, OUIBar & KTCHN, serves an all-you-can eat breakfast and has a Selfie wall where you can screen-grab yourself and friends.

Travelling with Julie was also a pleasure. A dog bed, water and food bowls were provided. Do let them know in advance how large a pet you are travelling with, as the standard dog bed was too snug for Julie. We always travel with her bed in the car, so it wasn’t an issue at all for us.

Of course, there is a bar fridge and a laptop sized safe provided for your use, and we were happy to find fluffy disposable slippers and robes in the wardrobe. There is a 24-hour gym in the hotel too. Frankly, we loved being in the Red.