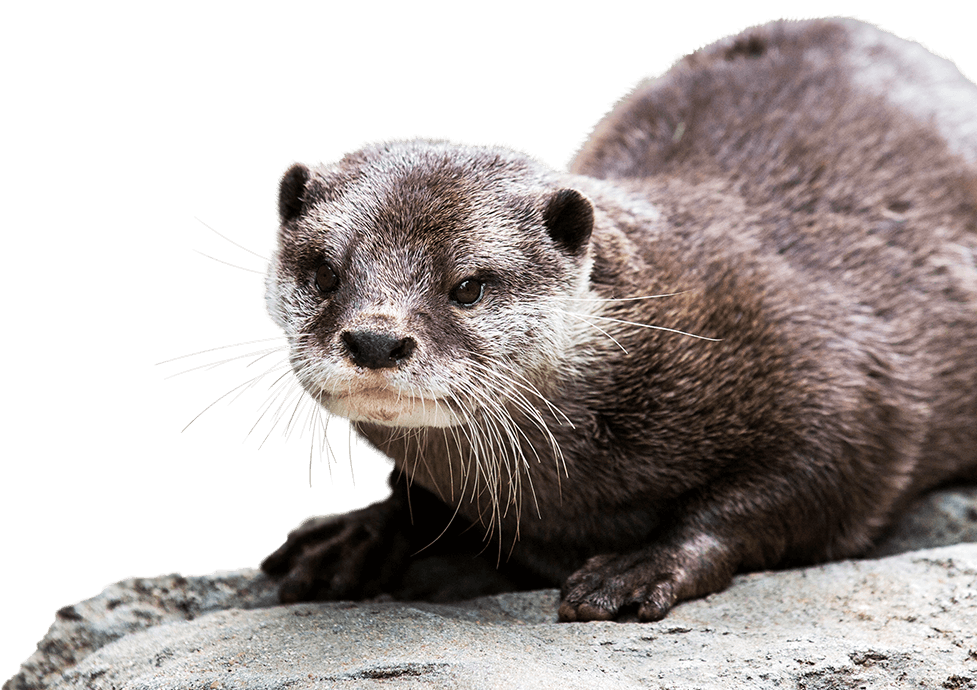 Otters are carnivorous mammals in the subfamily, Lutrinae.

Lutrinae is a branch of the Mustelidae family, which also includes skunks, weasels, badgers, mink and wolverines, among other animals.

There are thirteen different species of otters that exist around the globe, ranging from the small-clawed otter to the giant otter. Most otters live in freshwater rivers, lakes and wetlands. The sea otter and the smaller marine otter are found in the Pacific Ocean.

As predators that are near the top of the food chain, otters are hugely important for keeping their environments balanced.

Most otters are small, with short ears and noses, elongated bodies, long tails and soft, dense fur. Otters have webbed feet and powerful tails, which act like rudders, that make them strong swimmers to enable them to catch fish and fight the flow of streams. Their nostrils and ears close to keep water out, and waterproof fur keeps them warm. River otters are much smaller than sea otters, (averaging from 4kg to 14kg) with a cylindrical body and small head.

Sea otters have the densest and thickest fur of any animal— Their fur contains between 600,000 to 1,000,000 hair follicles per square meter. There are two layers of fur – an undercoat and then longer hairs, that are visible. The layers manage to trap air next to the otter’s skin, which keeps the otters dry and warm, and helps with buoyancy. They must carefully groom their fur and furry undercoat to keep them clean and sealed off to water, because they’re not covered in the fatty layer that other sea creatures have.

An otter’s lung capacity is 2.5 times greater than that of similar-sized land mammals. Sea otters have been known to stay submerged for more than 5 minutes at a time, while river otters can hold their breath for up to 8 minutes. The increased time underwater improves otters’ opportunity to sense prey and forage for food. Otters have strong teeth and a powerful bite.

A sea otter’s tooth enamel is much tougher than that of humans, helping to prevent their teeth from being chipped when cracking into the prey using their high bite force.

Research suggests that the sea otter’s bite force may not be sufficient to open the hardest-shelled prey items, such as marine snails and thick-shelled bivalves, and they often make use of tools. They typically use a rock as an anvil and repeatedly bash their prey against it until the shell cracks open, then extract the meat from the shell with their canines. Sea otters are one of the few mammals (apart from primates) to have developed tool use. They have a loose patch of skin under their armpit to store both the food they’ve foraged, and their rock to crack it open.

Otters love to rest in groups. Researchers have seen concentrations of over 1,000 otters floating together.

Generally, a group of otters on land are known as a romp, while a group hanging in the water is called a raft. Sea otters will wrap themselves up in seaweed, forming something that resembles a raft – hence the word raft. Sea otters spend the majority of their lives on their backs, only flipping over onto their fronts when greater speed is required. Sea otters can reach up to 9km/h underwater, while the maximum speed of the giant river otter is an impressive 14km/h. Sea otters are polygynous (males mate with multiple females). While mothers and pups are usually solitary, sea otters can form social groups of up to a few dozen.

A daily food intake of 15–20 percent of body weight is key to survival for sea otters.

They adapt their patterns of predation and hunting behaviour to make the most of the prey available during the leaner months. Sea otters’ diet includes fish, sea urchins, crabs, mussels, clams and crustaceans. To find food, sea otters may occasionally dive as deep as 70 meters and will use their sensitive whiskers to locate small prey inside crevices or their strong forepaws to dig for clams.

When it’s time to nap, sea otters entangle themselves in kelp, so they don’t float away.

They also sometimes intertwine their feet with another sea otter, so that they stay together. River otters are especially playful, gambolling on land and splashing in rivers and streams. Baby otters are called pups or kittens. Sea otters can have a pup any time of the year.

A new-born pup needs constant attention and will stay with its mother for six months until it develops survival skills. Most otter species come ashore to give birth in dens, which sometimes have been used by other animals, such as beavers. Sea otters give birth in water, with females having only one pup at a time. The mother will produce milk, hunt, and teach the pup how to dive for food until the youngster is five to eight months old and can fend for itself.

They learn to swim when they are about two months old, when their mother pushes them into the water.

Otter families are usually limited to pups and their mothers, and these duos will spend most of their time either feeding or sleeping. River otters don’t breed until they’re at least five years old. Otters might look soft and cuddly, but remain dangerous wild animals. Otters and their mustelid relatives were once hunted extensively for their fur, many to the point of near extinction. Despite regulations designed to protect them, many species remain at risk from pollution and habitat loss. The sea otter is listed as endangered on the IUCN Red List, pressured by pollution, pesticides and conflicts with fishermen who kill them for eating their fish. Asian otter species also face threats from the illegal pet trade.