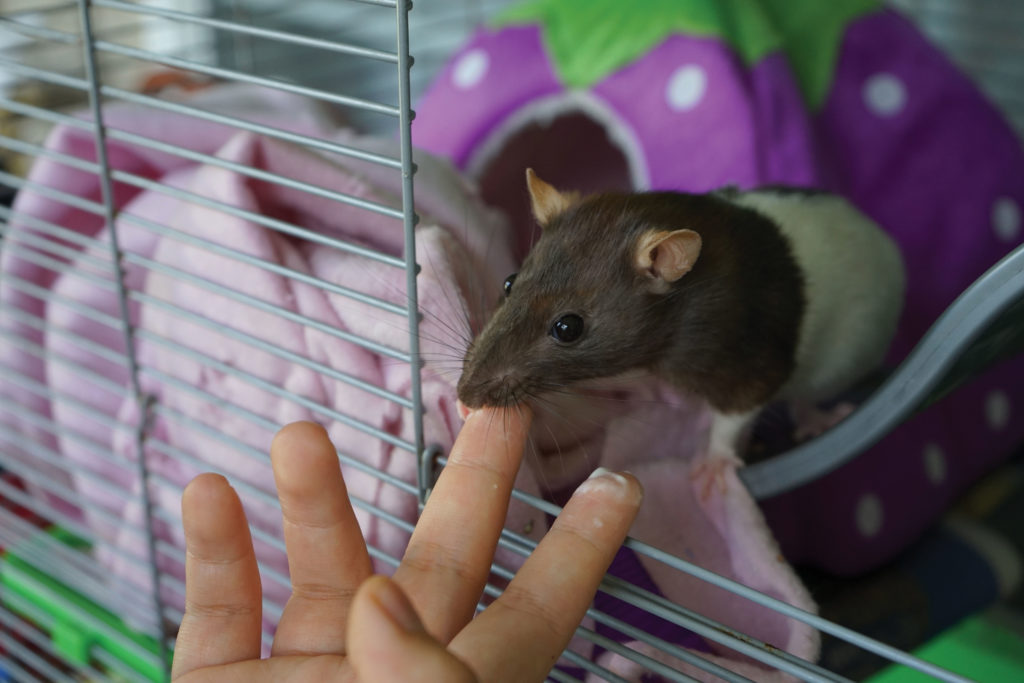 Rats are known as being social and affectionate animals. They enjoy the company of other rats, while domestic rats love being with humans.

Rats are mammals, referred to as “rodents”, because they belong to the scientific order of Rodentia. Rodents can be described as a group of small, non-flying mammals with large, sharp front teeth. There are over 52 species of rats that have been discovered.

Some rats live in communities in which they groom each other, sleep together and even play.

Rats are territorial, so they can turn aggressive toward unfamiliar rats. A group of rats is called a “mischief”.

Male rats are called bucks, while female rats are called does. Rats are mainly nocturnal (active at night) and live mostly underground. Antarctica is the only continent uninhabited by rats.
There are rats who live in the wilderness, such as forests and woods, and others in fields and meadows. Some rats, like the wild tree rat, live on tropical islands. Rats can thrive in a multitude of environmental conditions and adapt their diet to their resources. Rats are colour blind and have very poor eyesight but have an incredibly strong sense of smell. According to some studies, rats have excellent memories and can memorize a route after having navigated it once. When a rat is happy, they chatter or grind their teeth. Rats can regulate their body temperature by expanding and contracting the blood vessels in their tails. A rat’s tail also helps them to balance. Rats communicate through body language, touch, smell and sound.

They’re also great swimmers and can hold their breath for several minutes. Rats’ teeth can grow up to 12 cm per year, so it’s important for them to chew on things to wear them down. The tooth enamel of rats is said to be very strong, with some people believing it to be stronger than steel. The maturity of rats can be shown by their yellow teeth, while baby rats, initially, have white teeth. A rat’s eyes are on either side of their head and can move in opposite directions.

Rats can hear extremely well, picking up sounds that are too high-pitched for humans to hear. A rat’s whiskers are very sensitive. They will brush the long hairs against any objects, helping them build up a detailed picture of their environment. Although very curious animals, rats are also shy. They would rather run away from than confront a potential threat. Rats will spend several hours every day grooming themselves and their group members. They wash themselves by constantly licking their fur. Rats take care of sick and injured members of their group. Without companionship, rats tend to get lonely and depressed, according to some studies.

The life span of a rat varies between species, but the average lifespan of a rat in the wild is one year (due to predators).

A rat can go longer than a camel without having a drink of water. Their ideal diet consists of a good amount of vegetables and fruits. Like hamsters stuffing their cheeks, rats hoard food for later. Rats cannot go for more than 4 days without food. In the wild, rats will eat things like fruit, seeds and plants, and are more likely to be vegetarians. City rats like to eat garbage. They will consume things like pet food and any human food that they come across, even meat.

One of the familiar facts about rats is their ability to breed in a short time span. A female rat can reproduce approximately every three weeks. When she gives birth, the litter typically contains anything from 6 to 20 babies. These baby rats become sexually mature when they’re three to four months old.

Some female rats can go into heat as quickly as 10 to 24 hours after giving birth – this phenomenon is known as “Postpartum Estrus”.

Baby rats are born with their eyes closed and are helpless without parental care. Their eyes open between 12 and 17 days after birth, and they are independent by 21 days.
Infants, or baby rats, are called pups or kittens.

In addition to material such as wood, rats can also gnaw through lead, cinder blocks, soft concrete, plastic and aluminium sheeting.

According to some studies done by the Centre for Disease Control and Prevention (CDC), rats and mice can spread over 40 diseases, including the bubonic plague, typhus and leptospirosis. They were responsible for an outbreak of monkey pox in 2003. Rats destroy about 20% of agricultural products worldwide each year.

Rats can be trained to do several tricks, and will also learn their name. Scientists have identified that some rats might have dreams. Because most rodents are small, rats are the perfect bite-size meal for birds of prey (like hawks and owls), felines (cats), reptiles (snakes), dogs, and other carnivorous animals.