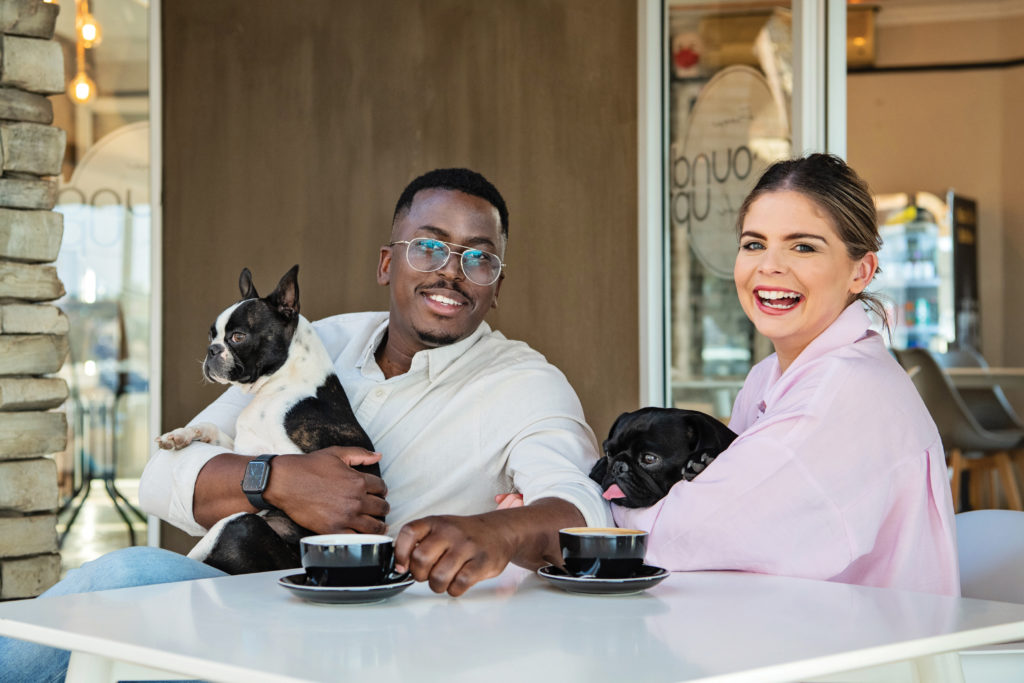 PetPrints chatted to Msizi about his successful career, joy for helping others, and, of course, Nala and Frankie, the two adorable dogs he shares with fiancée Angela.

Every now and then, if you’re really lucky, you get to talk with someone so crackling with energy that they inspire you to take on the world. Msizi James is such a person and it is this joie de vivre that has led to the young Durbanite becoming one of Mzansi’s most popular radio hosts. He landed his dream job at 947 earlier this year, but what his listeners may not know is that he also has a huge heart for both people and animals. Msizi’s passion for making the world a better place is tangible, but he doesn’t just talk the talk – he’s making it happen. Pet Prints chatted to Msizi about his successful career, joy for helping others and, of course, Nala and Frankie, the two adorable dogs he shares with fiancée, Angela.

Msizi is best known for the dynamic radio shows in which he gets South Africans amped up for the day, “Radio, for me, has been a case of luck meets opportunity meets hard work. After Matric, I worked as a surf coach at a children’s holiday camp. Friends encouraged me to enter an East Coast Radio voice competition, which resulted in my first job as a radio host. I knew there and then: this is where I am meant to be. Two years later, I was offered a job at 5FM, where I stayed for three years – and now I have my own show at 947, where I get to use my voice and love of music to get people feeling positive.”

He has an entrepreneurial side, too, and owns Gaya Coffee Company, The Brandlab and a chain of coffee shops, From Ground Up (in fact, the Randburg branch was the scene for our fun-filled photoshoot with his cuddly canines). But what really gets him smiling is his recent engagement to high school sweetheart, Angela McGennis. “We dated in high school, but, after I matriculated, we went our separate ways,” he explains. “In 2016, we reconnected, when both of us visited Mozambique with mutual friends. Fast forward to March 2021 and I proposed at &Beyond, Ngala Safari Lodge’s magnificent treehouse, which was so romantic!” With the wedding set for December (wedding at &Beyond, Phinda), 2021 is clearly turning out to be a busy year for this dynamo.

Angela is credited with his transformation into a total dog lover – one who not only adores his own canines, but also goes out of his way to help other animals in need.

“I never thought I’d love a dog, never mind actually having one,” laughs Msizi, who, with Angela, adopted not one, but two furry family members during 2020’s lockdown. “I didn’t grow up with dogs and, to be honest, I was actually pretty wary of them. That was until a few years ago when Angela (at the time, my girlfriend) visited, bringing her dog, Boss, with her. At first I thought: ‘No way!’ And then I saw how cute he was. It wasn’t long before his big, brown eyes won me over…”

As we know, that’s exactly how dogs get us – one look from those puppy-dog eyes and we’re putty in their paws. “When we moved in together, Angela immediately said: ‘We need a dog!” I believe that dogs are a lifetime commitment, and I wasn’t ready for that so, initially, I said no, he explains. “But then Covid-19 happened and everything changed.”

The couple decided to become dog fosters during lockdown and welcomed two Beagles from Beagle Rescue. “Unfortunately, although they were lovely dogs, they had health issues and struggled to get around our double-storey house – we were basically having to carry them everywhere. When we explained our concerns, the organization recommended we bring them back,” explains Msizi. “To my surprise, returning them absolutely devastated me. Even though it was the right thing for them, I was heartbroken. That was the switch for me – that was the moment when I realized: actually, I am a dog person!”

Missing the pitter-patter of doggy paws, the couple decided to get a puppy, “It was level 5 lockdown, so it was difficult to be outside, never mind go looking for dogs to adopt, so we put the word out on community groups and that’s how we ended up with Nala. When I went to pick her up, this little jet-black pup came running to me and I just knew: she’s The One. I fell in love with her immediately. As I drove her home, she just sat in her basket, gazing at me with those big, soulful eyes the whole way. Since then, she has been the apple of my eye.”

They decided that Nala needed a friend, “Boston Terrier Frankie soon became Nala’s best friend and we love her just as much (although I admit that Nala will always be my number one.). They’re so quirky and lovable; we can’t imagine life without them. Of course, because we’ve seen how many dogs are without homes, we had them spayed so that there won’t be any accidental litters.”

A year later and Msizi and Angela have become increasingly involved in helping animals. Because of Nala, Pug Rescue SA is their first love and they volunteer and donate regularly, and assist with marketing. Msizi also recently visited CLAW (Community Led Animal Welfare) in Johannesburg, “It’s a heart-breaking situation because there’s so much need and very little resources. When the opportunity came to donate R 120 000 with Dis-Chem through the Random Acts of Kindness initiative, CLAW was the perfect choice. People really should support these organisations – they do so much good and rely on donations.”

LEARNING A CULTURE OF KINDNESS

The youngest of four children, Msizi spent his childhood with his biological mother, Sylvia Hadebe, in the Hillcrest suburb, Molweni. At the age of five, American missionary, Pat Blair, moved into a house nearby and Msizi started visiting her regularly, eventually living with Pat until the age of 18. He says that both women are strong, loving and care greatly about helping others. “My moms are two of the kindest people I’ve ever met,” smiles Msizi. “I was brought up with the idea of ‘giving back’ and, because kindness has been extended to me throughout my life, it’s important to me to share that with others. My biological mom was a home-based carer and now runs her own NPO called Bhekimindeni Community Centre (“looking after the families”), which provides necessities like food, school uniforms and comfort items to destitute families in Molweni.”

Following the recent unrest in KwaZulu-Natal (KZN), Msizi used his platforms to collect many kilogrammes of food donations, which he and fiancée, Angela, took to needy communities, driving from their home in Gauteng to KZN. “There was a major problem with food insecurity and, because of my mom’s work, I knew that people were really struggling. We went door-to-door handing out food parcels to families which had literally nothing,” says Msizi, adding that, while on their food-delivery mission, the team also rescued several neglected dogs. But he’s not done yet, “There is so much more to do and we’ve decided to make this a permanent part of our lives.”

Msizi leaves us with powerful words: “In a world where we’re bombarded by bad news, if we can spread a little kindness, it goes a long way, and to quote Ralph Waldo Emerson: ‘You cannot do a kindness too soon, for you never know how soon it will be too late’. So, make kindness a part of your life and you’ll never look back.”

1.Educate yourself. When you foster, find out about the dog you’re bringing in, the breed or type, etcetera, so you can learn about their needs and cater for them.

2.Bear in mind that, if it is just to foster (not adopt), it might be quite difficult to give them back as you create a bond.

3.Fostering is a great way to make sure you’re ready for the responsibility of a pet before making that commitment, while still helping animals in need.