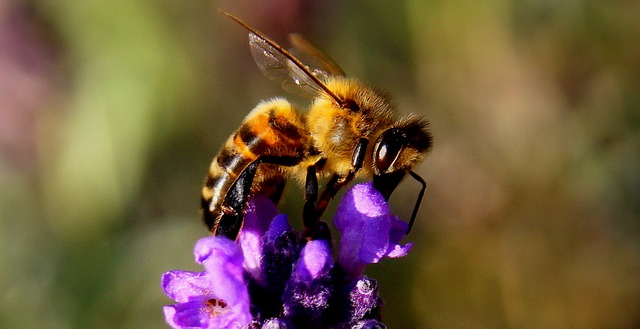 The honey bee has been around for millions of years.

Honey bees have 6 legs, 2 compound eyes made up of thousands of tiny lenses (one on each side of the head), 3 simple eyes on the top of the head, 2 pairs of wings, a nectar pouch, and a stomach

It is the only insect that produces food eaten by man

Each honey bee colony has a unique odour for members’ identification

Honey bees are super-important pollinators for flowers, fruits and vegetables. This means that they help other plants grow

Their tiny wings must flap 12,000 times per minute

A honey bee colony can contain up to 60,000 bees at its peak

The members of the hive are divided into three types: Queen, Workers and Drones.

The workers are all female and their roles are to forage for food (pollen and nectar from flowers), build and protect the hive, clean and circulate air by beating their wings

Worker bees must perform different roles throughout their lives

Foragers must find flowers, determine their value as a food source, navigate back home, and share detailed information about their finds with other foragers

From spring to fall, the worker bees must produce about 27kg of honey to sustain the entire colony during the winter

After emerging from her queen cell, the new queen flies from the hive to mate

If the queen doesn’t mate within 20 days, it’s too late and she loses her ability to mate

The queen bee holds the sperm in her spermatheca and uses it to fertilize eggs throughout her life.

She (the Queen bee) is busiest in the summer months, when she can lay up to 2,500 eggs a day

The queen honey bee lays up to 1500 eggs per day, and may lay up to 1 million in her lifetime

Once honey bee eggs hatch into worker larvae, they’ll be fed around 1,300 times per day

If the queen bee dies, workers will create a new queen by selecting a young larva (the newly hatched baby insects) and feeding it a special food called “royal jelly“

If the queen honey bee is removed from the hive, the rest of the colony knows about it within 15 minutes

Just 48 hours after mating, the queen begins her lifelong task of laying eggs

The queen can live up to five years.

Drones are the only male honey bees

The male honey bees (also called drones), have no stinger and do not work at all

The honey bee uses the most complex symbolic language of any animal on earth, outside of the primate family

As temperatures fall, the bees form a tight group within their hive to stay warm.

Honey bee workers cluster around the queen, insulating her from the outside cold

In summer, the workers fan the air within the hive with their wings, keeping the queen and brood from overheating

The youngest worker bees make the beeswax, from which workers construct the honeycomb

Eight paired glands on the underside of the abdomen produce wax droplets, which harden into flakes when exposed to air

Bees have two separate stomachs; one for food and another just for nectar

Only worker bees sting, and only if they feel threatened and they die once they have still stung

Honey bees are built for short trips from flower to flower, not for long distance travel

A hardworking forager may live just five to six weeks

Honey bees communicate with one another by dancing

Like other bees, honey bees cannot see the colour red

They may visit red flowers because they are able to see the U.V. patterns in the flowers

It has been estimated that it would take 1,100 bee stings to produce enough venom to be fatal

Sadly, over the past 15 years, colonies of bees have been disappearing, and the reason remains unknown

Referred to as ‘colony collapse disorder’, billions of Honey bees across the world are leaving their hives, never to return