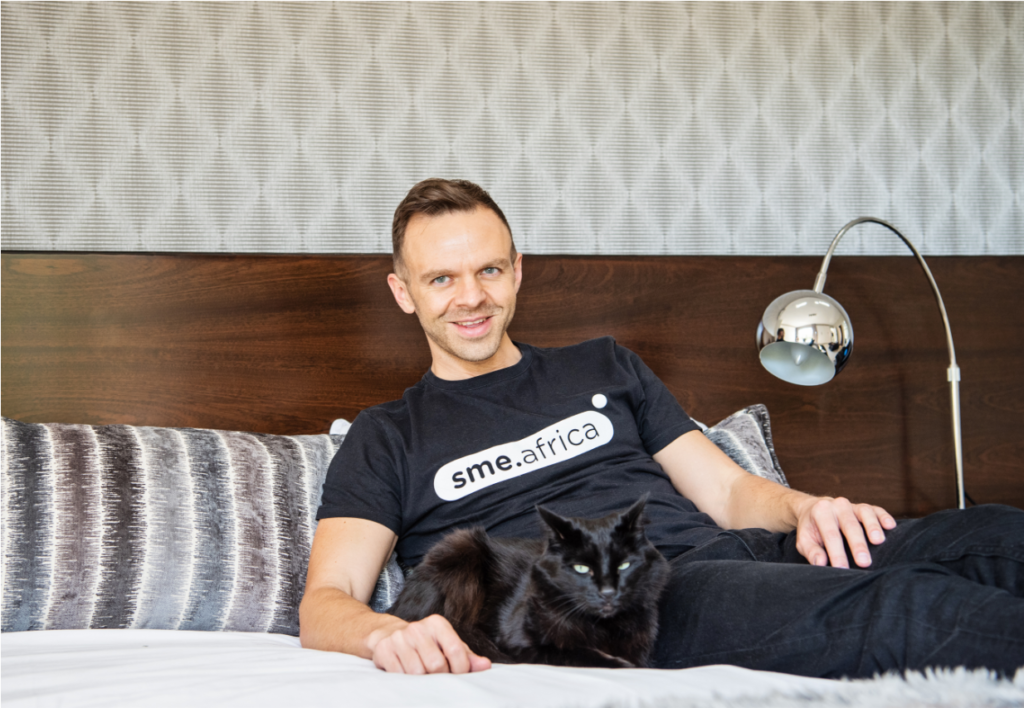 Marnus: Marmite & Mowgli on taking over the world

I’ve been reading quite a few biographies lately, and a few things have become quite
evident. Namely: No great person has ever had it easy. If you want to reach greatness, never measure your success with that of other people. We are all unique in our own right and don’t need to explain our paths, personalities or goals to anyone, not even those who want to criticize them. And probably the most important of all: never forget where you came from – This last lesson is so important. To be able to empower someone and pay it forward, you need to stay humble. This, to me, is one of the most beautiful and inspiring treats of a man I’ve been following for a few years, Marnus Broodryk.

From the television series Shark Tank, one could ascertain that Marnus was not to be messed with. He wasn’t going to let himself be pushed around and wouldn’t invest in any business that compromised his values. From reading his book, you would have thought that he was about eighty years old. His advice is wrapped in a neat little bow and if you had to guess how long it took him to learn those 90 rules you wouldn’t think that it only took him thirty-two years. The catch is that he started “the hustle” at a very young age. From mowing lawns and dabbling in all kinds of small business initiatives, Marnus has never settled for the easy path. It takes an inspired person to get up day after day, always keeping his eye on the prize, and not give in to immediate gratification.

As a strict vegetarian and self-confessed animal lover, it should come as no surprise that Marnus has two feline companions sharing his home. The fortunate felines are called Marmite and Mowgli. As with most cats, the two didn’t appreciate our visit too much and were quite coy about having their pictures taken. Our interactions were short, and the fluff balls were aloof, only appearing when bribed.

Not surprisingly, Marnus kept his cool and just went with the flow. Acknowledging the keen sense cats have for energy levels, it’s obvious that he understands the species and how they operate. “On the days I’m stressed, Marmite and Mowgli will keep their distance. As soon as I sit down to read or meditate, Marmite will come to sit on my lap. They just love that energy.”

While giving the felines some room to breathe, we had a few minutes to discuss the origins of the family.

THE FAMILY DYNAMIC
As a person who always loved cats, Marnus decided that the name Marmite would be a great name for his first feline companion. In pursuit of a candidate that matched this name, he found a fluffy, black counterpart on Gumtree. He fell in love with the photos and was asked by the family to come for an interview, as they wanted to ensure that their kittens were going to good homes. Marnus was able to take Marmite home and the Maine Coon-mix is now the oldest furchild in the Broodryk home.

A few years later, feeling that Marmite needed a sibling, Marnus again took to Gumtree and found an ash-grey kitten, being advertised as a Ragdoll-mix. It’s easy to see that pets really do take on their names. Mowgli is a little shy and doesn’t really like hanging around people. He much rather spends his days lounging around the house with his brother.

Curious to know if there would be more felines to make a clowder, we raised the question, but Marnus insisted that the timing wasn’t right: “No, not at the moment. I would love to get another cat or a dog, but with my current lifestyle, it just wouldn’t be fair. I travel a lot and Marmite gets really upset every time I’m gone for a long period of time. At the moment it’s still manageable and I can have someone come in to feed, play and brush these guys, but it wouldn’t be fair to take on another pet right now.”

THE MAN BEHIND THE CATS
It’s been well documented and philosophized that only those who are at peace with themselves and the world around them will attract the company of cats. Charles Dickens, one of the most influential writers in history, shared the same love, writing: “What greater gift than the love of a cat?” Dickens was just one of the many thinkers of his time, taking the favour of his cats seriously.

Marnus is no exception to this rule. This is a man that is so at peace with himself and the journey he has travelled to get where he is, being one of South Africa’s most prominent self-made millionaires. Marnus is not only the
youngest investor in the Shark Tank, or the owner of one of the largest accounting
firms in the country, but he is also the founder of SME Africa. A platform started to help small businesses
to connect with each other. The advice they share and the connections forged through
this platform is a labour of love. The intention of assisting small business is so transparent and generates hope for a country where we need education and job creation above all else.

This is a man, not only set on making money, he wants to create change. To better a world for future generations to come.

ADVICE FROM THE SHARK HIMSELF
Seeing as we were in the company of a mogul, I would be silly if I didn’t ask the question that was weighing on everyone’s mind: Is there a future for the pet industry in South Africa? The response was a resounding: Yes! “Whenever we go to markets and I see something for the cats, I buy it, because I’m never sure if I’ll find it again. Pets have become like children and I like spoiling them. If you look at international markets, there are a few businesses that are popping up and doing well. I’m sure we can do that here. If you have a look at the adverts for pet products that are featured on prime-time television, it’s a clear indication that there is money in the industry and that people are investing in their pet’s health.” Now, isn’t that wonderful news for all our entrepreneurs!!!

As we concluded our interview, one of my favourite parting questions is always: If you could give
one piece of advice to a prospective pet-parent, what would it be? “It would definitely be to adopt an animal. Knowing what I know now, that’s the only route I would go. And, that a pet is a lifetime commitment. You need to understand that.”

As we finished up our conversation, I felt optimistic. There was hope. There is always hope.
This feeling is one of the side-effects you get when you work with inspiringly authentic individuals who are dead-set in making a change to the world.

We look forward to seeing Marnus, Marmite and Mowgli taking over the world with positivity, hope and just a touch of catnip!